It is very easy in today’s complex multi-cultural world to inadvertently offend someone. (graphic from wikiHow)

When I hold a diversity and inclusion workshop with a client, early in the discussion, I ask people to think about where they may be on the “diversity spectrum” when considering this subject. I assert that people generally fall into four categories. Where are you?

• Change Agent. These are the leaders on the diversity subject. They are full vocal supporters of diversity and inclusion, and are often the leaders within their organizations on this subject. They may teach workshops, are not afraid to initiate discussions with other leaders and employees, and are adroit at articulating the business case and value of diversity. 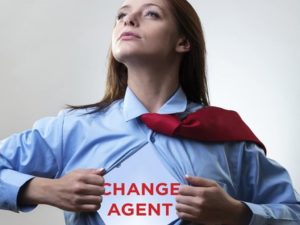 Hopefully we can all aspire to be change agents or at least active supporters in terms of diversity and inclusion (photo from Plays-In-Business.com)

• Neutral. These are people who most likely have not given the subject much thought, and simply go along with the flow in their areas. Often, they may not have been educated on this subject.

• Deliberate Offender. These are people who can do quite a bit a damage within an organization. They are anti-diversity and often ostracize or criticize diverse groups or constituencies within the enterprise. They may even go as far as to spread false information and fear about others.

But in addition, there is a fifth category where even those of us who are change agents and active supporters may find ourselves from time to time – the naïve offender.

What is a naïve offender? This is a person, who on occasion, unintentionally makes an error or a misstep in terms of some aspect of diversity. Often a person may even have good intentions, but accidentally say something offensive to someone else. Frequently these missteps simply come from a lack of knowledge.

What are some examples of a naïve offender?

• Using a word or phrase that is offensive to the hearer. For example referring to sexual orientation as “sexual preference,” which is used by those people trying to perpetrate that gay people chose to be gay and can change, or an older white man, who calls all younger men “boy” addressing an African-American man as “boy,” which conjures up cultural references to slavery.

• Saying something in jest which can offend certain hearers. Examples could be taking about how you are going to party it up and drink tequila and eat tacos to celebrate Cinqo De Mayo, or making reference to nooses or chains with African Americans.

• Speaking more loudly and raising your voice to someone who does not speak English fluidly. Simply slowing down and avoiding complicated words and idioms would be helpful instead.

• Treating all Hispanics or Asians as collective groups and not appreciate that Latin America and Asia are comprised of dozens of countries with their own distinct culture.

• Unknowingly referring to a transgender person or a gender fluid person by the wrong pronoun.

Even as a diversity trainer, I make mistakes as a naïve offender. I was presenting some material that was 3-4 years old using the terms “hearing-impaired” and “sight-impaired” when those communities now prefer using the words deaf or blind. The word impaired connotes that someone has a fault or is not capable.

What should you do if someone “naively” offends you? I would think that based upon your past relationship with someone and their body language and tone of voice, you can discern if the person is making an honest mistake or is truly belligerent, e.g. a deliberate offender. If you sense the person is a naïve offender, turn it into a learning moment and graciously point out their error. Lashing out at the person or ostracizing them will not be helpful to them, nor your community.

And what are some hints and tips for the naïve offender? How can you continually improve in this area?

• When you make a misstep and realize it, immediately and sincerely apologize.
• When someone points out a diversity mistake that you made, thank them for pointing it out.
• Continue to educate yourself about diverse communities you interact with, especially those you may be less familiar with.
• Think of ways where you can grow more as an active supporter or change agent of diversity and inclusion.

May we all be gracious and continue to grow in building a world where all diversity is fully understood, respected and included. 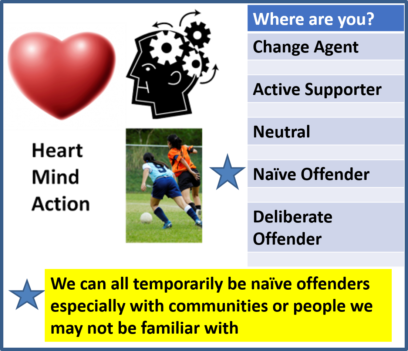