A more personal blog as we near the end of LGBT Pride Month, June, 2014. See last’s month’s blog about being an ally that also includes links to half a dozen other LGBT Pride blogs.

Blog author Stan Kimer (on the left) with his partner of 23 years Rich Roark on a recent vacation in Morocco.

In April, I was invited by our local PFLAG (Parents, Families and Friends of Lesbians and Gays) to share my life journey as an out gay man. Made up of parents, families, friends, and straight allies united with people who are lesbian, gay, bisexual, and transgender (LGBT), PFLAG is committed to advancing equality and societal acceptance of LGBT people through its threefold mission of support, education and advocacy. PFLAG now has over 350 chapters and 200,000 members and supporters crossing multiple generations of American families in major urban centers, small cities and rural areas in all 50 states.

As I prepared my presentation, I ended up coming up with 8 key lessons to share during my almost 25 year journey as an out gay man:

1. It is great to be true to myself, and others will respect that. Life has been so much better living fully and honestly into who I really am!

2. Being super nice works a lot better than being super nasty. When my father was initially cool to the idea of me being gay and having a boyfriend, my boyfriend won him over by going over and doing my parent’s yard work after my father broke his ankle. 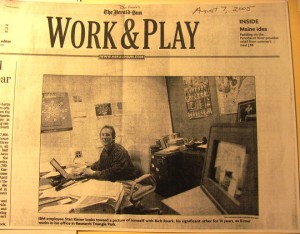 A later newspaper article in the Durham Herald Sun about out LGBT employees in the work place featured blog author Stan Kimer while at IBM.

3. Sometimes the optimal time to come out simply appears. Grab it and run! I had not initially planned to publicly come out when I did, but an opportunity to participate in a newspaper story when IBM announced domestic partner benefits provided an excellent platform for me to share some of my story.

4. You never know who is watching and what good may come of it. After coming out, I spoke on a number of diversity panels at IBM as an out gay employee, not realizing that IBM’s VP of Diversity Ted Childs was listening. He liked what he heard and offered me the position of IBM’s global corporate LGBT Diversity Manager, which was the most fun job I ever had!

5. Building allies and not having a “single issue focus” is important. I served many years on the Governing Board of the North Carolina Council of Churches advocating for racial justice, education improvements, economic justice, health issues, etc., and even as an out gay man was elected President.

6. As a visible gay man in a leadership role (President of the NC Council of Churches), I knew I had the added responsibility of being a good representative of the LGBT community.

7. Take the hate with a grain of salt and chuckle at the absurdness of it all. When I was elected President of the NC Council of Churches, 98% of the publicity was positive (example – link to Associated Press story), but one over-the-top negative article asserted that my hidden agenda was to visit junior high Sunday School classes to seduce young boys. How ridiculous!

8. It’s now time to enjoy my remaining years! As I approach 60 years old, I am going to do the things I like the most and walk away from any aggravating or demeaning environments.

I really enjoyed sharing my journey and these lessons at that April PFLAG meeting, and am very open to speaking or sharing at similar venues – you can email me at [email protected]