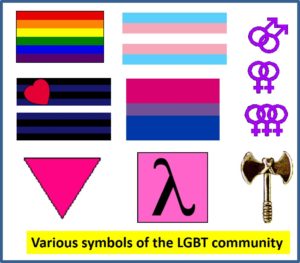 With lots of useful links!

50 years ago on a weekend in late June in the Greenwich Village in New York City, a revolt took place that changed the course of history for Lesbian, Gay, Bisexual, Transgender (LGBT) people all over the world. Patrons of the Stonewall Tavern, led by several transgender women and drag queens stood up to unfair police brutality and stated that they would no longer let their human rights be unfairly trampled. Since that fateful night, most LGBT pride celebrations are held in late June.

This blog contains five suggestions for engaging your corporation or organization during June Pride Month, followed by a short history of major LGBT milestones in the US, starting with Stonewall 1969!

1) Bring me in to speak and train. I continue to offer myself as a nationally recognized LGBT diversity speaker and trainer for your employees, management training, or employee resource groups, with a broad range of 9 LGBT diversity workshops from the business oriented to the more lighthearted (including culture and history of LGBT in the US) to the more personal. In fact, why not invite me in for a day and I can do various meetings with HR leaders, managers, employees and your employee resource groups? Use this link to download my speaking packages that include topics and bio, or Email me at [email protected] to request the info.

2) Start a productive group dialogue around transgender people. Check out my recent blog, “Explore transgender diversity through a cool one-woman show,” about how JJ Marie Gufreda uses her edgy thought provoking show, including original music, to share experiences and to create open dialogue about transgender people.

3) Financially support the Pride in the Triangle’s LGBTQ+ Workplace Equity Toolkit, which we hope to launch this summer if we can raise the rest of the funds soon. Even if you are not in the Triangle region of North Carolina, you can still support this project and send participants to our 2-day “Training of Trainers” to be held in our area.

4) Take an online crash course. Whether you just want to be a better ally to LGBTQ people, or want to create a better workplace, home, or organization for everyone, consider this online LGBTQ Diversity Training Crash Course (link) from one of my business associates, Sean Kofosky. This inexpensive yet valuable offering covers basic LGBTQ terminology / definitions,the difference between sexual orientation and gender identity, ways anti-LGBTQ attitudes and behavior reach into many corners of society, and simple actions you can take to be an ALLY!

The Stonewall Tavern, Circa 1969

June, 1970: Christopher Street Liberation Day on June 28, 1970 marked the first anniversary of the Stonewall riots with an assembly on Christopher Street; with simultaneous Gay Pride marches in Los Angeles and Chicago.

December, 1973: The American Psychiatric Association removed homosexuality from its list of mental disorders.

1993: Minnesota became the first state to ban employment discrimination based on both sexual orientation and gender identity when it passed its Human Rights Act.

June, 2015: The US Supreme Court rules for recognition of same-gender marriage in all 50 states.

June, 2016: President Obama announced the establishment of the Stonewall National Monument, a 7.7-acre site in Greenwich Village to be administered by the National Park Service.