A close up of the bas-relief on Stone Mountain, and view from a distance.

As a diversity consultant and numismatist (a collector of money,) I am now finding some interesting connections between our nation’s money and our diversity as a nation. In my last blog, “Black Lives Matter and the $20 Bill – an Awful American Travesty,” (do use the link and read it), I recounted the very sad story of how the approved plans to place African-American abolitionist Harriet Tubman on our $20 bill got derailed.

In this blog, I am going to share the history of one of our commemorative half dollars that has a disturbing connection to the horrific racist group the Ku Klux Klan, abbreviated the KKK. I was recently catching up on some of my back magazine reading and read this story in one of my 2018 Numismatist Magazines. If it were not for my interest in coin collecting and reading this story, I would have never known about the sordid history of Stone Mountain and it’s world record size bas-relief carving.

When the World’s fair was held in St. Louis in 1892 on the 500th anniversary of Christopher Columbus’s arrival into America, the US produced its first two commemorative coins; the Columbus half dollar and the Isabella quarter. Since that time, the US has issued numerous commemorative coins to celebrate historic milestones, or as fundraisers for projects. Most often, these commemorative coins are sold to the public for a premium over their face value.

This blog summarizes the history of the 1925 Stone Mountain half dollar, and you can read the complete detailed story using this link to Coinweek’s online article “The Birth of the Klan Half Dollar.”

The beginnings:  The story starts in 1909 when the Atlanta, Georgia chapter of the United Daughters of the Confederacy (UDC) floated the idea of carving into nearby Stone Mountain a relief to honor fallen Confederate soldiers. Coincidentally, the KKK found its second birth and resurgence when a group of 34 white men met atop Stone Mountain on Thanksgiving Day 1915, with many of the men wearing the white bed sheets and pointed caps most associated with the klan.

The plans turn into action: One of the men present, Sam Venable, was the owner of Stone Mountain and later deeded the north face to the UDC to actually execute the carving project. The UDC hired renowned sculptor Gutzon Borglum (who also designed the carvings on Mt. Rushmore in South Dakota) to design a Confederate battle scene for the face of the mountain. Some KKK-ers actually wanted members of the klan in their robes to be carved into the scene, but Borglum prevailed with a plan that featured Confederate leaders Jefferson Davis, Robert E. Lee, and Stonewall Jackson. After meeting some of these southern leaders, sculptor Borglum himself joined the KKK and authored a horribly racist and anti-Semitic essay. 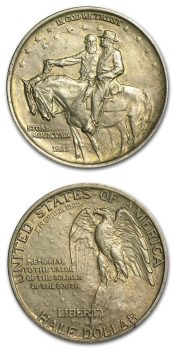 1.3 million of these “Stone Mountain” half dollars were minted

Plans stalled during World War I, and restarted after 1920. The work was expensive, so in 1923 project leaders started to advocate for a creation of a commemorative coin that would be sold for a premium to raise funds for the project. Borglum stopped his work on the mountain carving to work on designing the coin. Congress passed the legislation, the billed was signed by President Coolidge, and 1.3 million coins were minted in 1925.

The Completion: Various conflicts resulted in the firing of Borglum, and the carving work on Stone Mountain stopped for several decades, not to be completed until 1965. Over the past decade, the carving has been a great source of conflict, and will likely be even more so in today’s debate about memorials that arose from the motivation to promote white supremacy.

1) Isn’t it a disgrace that our US Treasury Department could produce a commemorative coin to aid a project of the Ku Klux Klan, yet recently scuttled plans to honor Harriet Tubman on our $20 bill?

2) Recently Richard Rose, President of the NAACP, called Stone Mountain “the largest shrine to white supremacy in the history of the world.”

3) One line from Dr. Martin Luther King Jr’s famed “I have a dream speech” included, “Let freedom ring from Stone Mountain of Georgia.”  (See page 6 of the speech)

Blog author Stan Kimer is a diversity consultant and trainer who handles all areas of workplace diversity and with a deep expertise in LGBT diversity strategy and training, Unconscious Bias and Employee Resource Groups. Please explore the rest of my website and never hesitate to contact me to discuss diversity training for your organization, or pass my name onto your HR department.  [email protected]