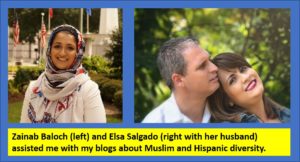 This op ed contains links to several of my “controversial” blogs over the years … please do explore them.

As we get toward the end of the year when we celebrate Thanksgiving, Christmas, Hanukkah, Kwanzaa and New Year’s … all these days of “good will,” I want to stop and explore a most disturbing phenomenon. Why is there still so much hate when we live in one of the most prosperous nations in the world? And what is strange is the hate is most frequently not coming from those who have little and are oppressed, but from those who are blessed.

I will share some examples from my blogging and then one story from local high schools.

For the past nine years, I have published two or three blogs each month about my consulting areas of expertise of diversity, leadership and career development. I often write short summaries of the blogs to post on Facebook and spend a little money to push them out to people who have shown interest in these various topics. Most of the time, on my non-controversial items to do with career development and general leadership, I may get one or two comments. But when I write on certain diversity topics, my Facebook feed explodes with hate. 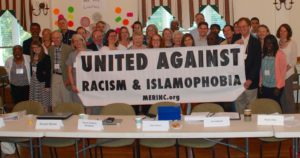 • My blog about Islamophobia in the United States. I received dozens of comments about how all Muslims are terrorists, how they have come to this country to take over the American way of life, etc. One guy even sent me a photo of a terrorist holding the severed head of a baby asserting that Muslims want to do this to all Euro-Anglo children.

• Writing about treating LGBT (Lesbian, Gay, Bisexual, Transgender) people with respect and equality. One angry man wrote that faggots deserved to be fired from their jobs and that they are going to burn in hell. One woman wrote that this “crap” should stay out of the workplace and schools (as if people should hide and deny who they are in everyday life?) and accused gay people of seeking special rights. And when I tried to politely share some facts with her, she accused me of harassing her and reported me to Facebook!

NOTE: My next blog will be “LGBTQ Equality – It’s equal rights, not special rights!”

• And even when I write about ongoing systemic racism in our country. Yes, things have improved but we still have issues to address and healing that needs to happen. People wrote about Blacks getting all the privileges now in the world and that whites are the ones discriminated against (have these people experienced what it is like to be Black and maneuver daily in a world controlled by White people?) And of course they posted the stereotypes of Black criminals and welfare mothers.

Writing about respect for Muslims, LGBT people and about addressing racism did indeed raise a lot of ire, but then I was shocked when I wrote a blog titled, “Five Lessons for our Country from the World Champion Soccer Team and Megan Rapinoe.” I thought it was an upbeat blog with some positive messages that would resonate with everyone, but then people commented that Ms. Rapinoe hated America, had desecrated our flag (fake news), etc. Can’t people at least try to focus on the positive messages?

It is so sad that we even see racism rear its ugly head among school children.

And even more sad is that some of this hate is even permeating our youth. Last month in our local Raleigh, NC paper was an article, (which also made national news) “NC Students talk on racist chat about killing black babies.” It detailed how students at two local high schools engaged in online chat using racial slurs, and advocating bringing back slavery and shooting black babies. So sad and so sickening.

I am puzzled on why people engage in hate. What are they afraid of? Do they think that Muslims, Gays and Blacks are going to steal their pie and that there will be less for them to eat? Or do they have such low self worth that the only way they can validate themselves is by putting other people down?

Raising up others and being kind to all people will build a better society. We will all be more positive, productive and happy. My grandmother once said, “If you don’t have something good to say about someone, it is best to say nothing.”

Peace and love to all my readers. Let’s be civil and kind to each other and contribute to a better society where our diversity makes us all stronger. One final blog link: “Diversity and Inclusion – Does it divide us or unify us?” 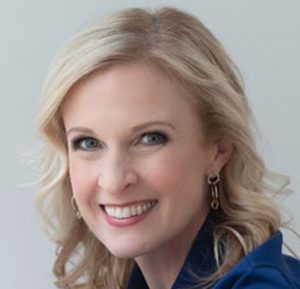 Jennifer Brown, author of “How to Be an Inclusive Leader.”

Every few months I will continue to write a “book review” blog when I come across an extraordinary book in my field of diversity, leadership and career development. I am pleased to share a little about a new book by one of the industry’s leading diversity and inclusion consultants Jennifer Brown, “How to Be an Inclusive Leader,” subtitle, “Your Role in Creating Cultures of Belonging Where Everyone Can Thrive.”

The topic of growing into an inclusive leader becomes increasingly important each year as the demographics of our workforce continue to get more diverse. We all need to realize that within a few decades, the United States will be a “minority / majority” country; that is, non-Caucasian people will outnumber white Americans. In addition, the highly skilled and professional future workforce will be a fully 50% female. And in the global internet connected economy – customers, employees and suppliers can be easily engaged practically anywhere in this world. We need to have the widest possible pool of candidates when recruiting talent, and then provide them an inclusive, welcoming, respectful workplace.

To thrive in the new economy, leaders must be inclusive or they will fail. This book provides the reader the perfect mix of theory, examples and practical steps to take in terms of learning how to grow as an inclusive leader. 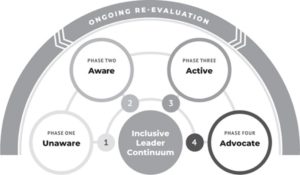 The basic structure of the book is the “Inclusive Leader Continuum,” which takes the reader through a journey of growth from being totally unaware of the need for inclusion to becoming an advocate. (See graphic at the left.) An interesting principle is that the journey on the continuum is not fixed and in one direction. A person needs to continually evaluate where they are, and may be in different places on their inclusion journey for different diverse groups. For example, you may be an advocate for racial inclusion and equity, but just discovering the need to include LGBT (Lesbian, Gay, Bisexual, Transgender) people in the discussion.

The basic steps along the continuum include:
• Being unaware that diversity and inclusion is more than compliance-related and that it is something critical that you need to get engaged in as a leader.
• Becoming aware of the role you play in inclusion and starting to educate yourself on how to move forward.
• Being active – taking meaningful steps to engage with and support a wide range of diverse people.
• Being an advocate where you are consistently leading to confront discrimination and to bring about systemic change.

What is so wonderful about this book is that Jennifer continues to throw in compelling stories and examples with each step, and offers a plethora of helpful actions you can take to grow as an inclusive leader. And Jennifer continues to tie back to the compelling business rationale for providing a nurturing work culture where every employee can fully belong and contribute their very best to the bottom line.

Now when I teach workshops on being an inclusive leader, I always provide attendees an action planning template where I actually filled in the first entry: Order and read “How to Be an Inclusive Leader by Jennifer Brown.” Link to order from Amazon. An additional special bonus – a great tool to accompany the book: you can take Jennifer’s online inclusive leader self-assessment which will let you know where you are on the inclusive leader continuum in the areas of prioritization, intent vs impact, embracing change, bias awareness and use of language.