Check out the many useful links to additional resources provided in this blog!

MAJOR UPDATE: On December 4, the US Dept of Labor announced the specific implementation of President Obama’s July executive order adding LGBT protections for federal contractors. All companies with new or modified federal contracts including subcontracts after April 6, 2015 must have non-discrimination policies that include sexual orientation and gender identity! 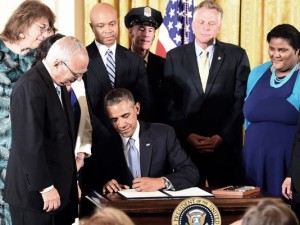 In my last week’s blog “The Great United States / North Carolina Diversity Divide,” (link) I contrasted two recent advances for LGBT (Lesbian, Gay, Bisexual, Transgender) equality and fairness at the US Federal Level with a recent North Carolina Governor’s executive order on equal opportunity that excludes LGBT citizens. One of those Federal advances was President Obama’s promise to soon sign an executive order giving workplace protections based on sexual orientation and gender identity for federal employees and contractors. The big update: the promised executive order was indeed signed by President Obama on Monday, July 21st!

The executive order included two parts. First, it makes it illegal to fire or harass employees of federal contractors based on their sexual orientation or gender identity. Second, it explicitly adds discrimination against transgender employees of the federal government (President Clinton had already included sexual orientation protections for federal employees earlier.) And very importantly, the executive order is all-inclusive and does NOT include a bunch of exemptions.

Here are three links to additional details:
• An excellent Huffington Post article about the executive order
• The official White House blog entry
• The actual text of the order.

What I find truly amazing is that some press outlets led with the headline, “President Obama’s LGBT Executive Order Endangers Religious Liberties.” For example, check out this Fox News story (link). Huh? How in the world does providing equal treatment for all Americans in the federal workplace endanger religious freedom? I would think that people of all faiths would want to make sure all people in our country were treated equally. In fact, many supportive religious leaders were in the ceremony when President Obama signed the order. (See photo) Also, check out this link to an excellent supportive commentary written by Rev. Elder Dr. Nancy Wilson, Moderator of Metropolitan Community Churches. 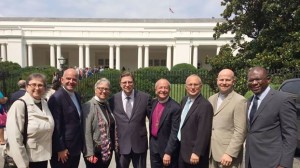 I would argue that there is absolutely no threat to religious freedom by this order. If a company felt so strongly that they should remove qualified LGBT Americans from their company or harass them, then they can make the choice to forgo doing business with the Federal Government. In fact, discriminating against LGBT people does a grave disservice to our country. As an American, I would want all subcontractors working for my government to have the very best, most qualified people working on these contracts regardless of gender, race, religion, or sexual orientation and gender identity.

Really – fairness, equal treatment, and having the best people empowered to do the best job they can is the true American way!

Three recent events at federal USA and state of North Carolina governmental level starkly highlight a major divide in how the country and my state executive branch governments understand and value diversity. 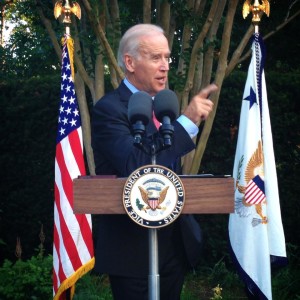 US Vice President Joe Biden references the historic USAID / NGLCC partnership at an LGBT Pride Month reception at his residence.

• On Monday, June 16, President Obama announced that he soon plans to sign an executive order giving workplace protections based on sexual orientation and gender identity (that address LGBT – lesbian, gay, bisexual, and transgender people) for federal contractors. Link to article.

• At the end of June, U.S. National Security Advisor Susan Rice announced a new partnership between the U.S. Agency for International Development (USAID) and the National Gay and Lesbian Chamber of Commerce (NGLCC) to encourage and support LGBT business owners and entrepreneurs in developing countries. Link to details.

What most of our country’s Fortune 500 companies and the federal government understand is that all people must be treated fairly in the workplace for all to work at peak capacity and to achieve the best results. Still too often in the United States, LGBT people are looked down upon, scorned, demonized or even bullied, and if any group needs workplace protection, it is this segment.

Sadly enough, many political leaders often speak of providing a business-friendly environment to help stimulate economic growth, but then at the same time fail to protect and empower all in the workplace. Three large employers in the state of North Carolina have already told me in my role as a diversity consultant and trainer, that they are having serious issues recruiting the best talent to their locations in North Carolina because of our lack of progression on LGBT equality and protections at the state level.

It is time for all people across all states in our country to advocate for the equal and fair treatment of all Americans in the workplace, both in the private and public sector, so that all can work at their very best and help grow our country’s economy and deliver government services more effectively and efficiently.