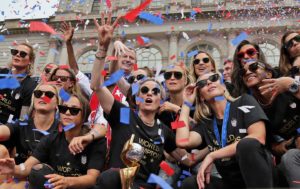 Brittney Spears sang “Whoops, I did it again.” And now the US Women’s Soccer Team has done it again – coming home in 2019 with their 4th world cup championship. In her short remarks in New York City, team co-captain Megan Rapinoe challenges all of us to take some lessons out of the women’s soccer team playbook to build a better country and better society. (link to CNN video).

Here are five of those lessons:

1. Diversity wins! Megan highlighted that a diverse set of women came together to create this winning team; white girls, black girls and those in between …. Straight girls and gay girls … girls with pink hair, purple hair, tattoos and deadlocks. Her point being that the team did not dwell on these differences and allow the differences to divide them, but instead came together as a cohesive team, celebrating their uniqueness and bringing it all together to win. As one of the most diverse countries in the world, we can come together with all the unique gifts that everyone brings to create a special and strong union instead of it creating division. 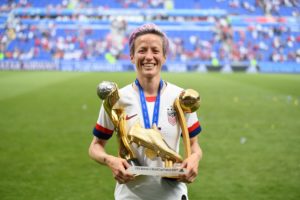 2. Everyone matters! Megan went through a long litany of all the support people who assisted the team in winning their championship; it was just not those women seated on the podium. Megan thanked everyone who contributed to their success: coaches, medical staff, videographers, security team and even the team chefs. And she thanked the US Soccer Federation President Carlos Cordeiro, with whom they have been some issues. She used this particular public forum to thank and honor him even though there have been some serious issues behind the scenes.

3. Be better and be positive! Megan issued a charge to every person listening at the event … to love more and hate less, to listen more and talk less. It is everybody’s responsibility to contribute their best in making the world a better place. 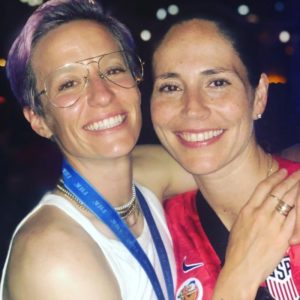 5. Collaboration instead of contention. Megan closed with the point that sadly, there is so much contention within our nation. Instead we need to work together and collaborate.

In the past, I have blogged often about the connection between sports and diversity and leadership. And I am pleased that our nation’s women’s soccer team and co-captain Megan Rappinoe has again highlighted how we as individuals and a society can learn from athletics and athletes.

Blog author Stan Kimer, Founder and President of Total Engagement Consulting by Kimer, is a diversity and career development consultant and trainer.

Here are some of my earlier blogs featuring athletics along with diversity and leadership:

Five Key Messages on The Importance of Out Gay Olympic Athletes

US Figure Skating’s Fantastic New Campaign: “Get Up!” Yes, in all aspects of our lives, we may fall, but the more times we get up and persevere, the stronger we become. In addition, I wrote a year-long series of “get up” blogs.

Lessons in Character from a Young Teen, about a young man who bounced back from disastrous defeat to become a champion.