Too often large corporations tend to bully and step on their small suppliers.

Some times I do like to vent, step out and address a topic that may ruffle some feathers. Having now owned my own career development and diversity consulting firm for 11 years, I have had some bad experiences with Fortune 500 very large companies. Yes, I have also had a good number of wonderful large company clients, but overall the ones that tend to act like entitled bullies are some of the mega-firms. Meanwhile almost all my smaller clients are easy to deal with and truly appreciate the value I bring them.

Experience One – I go through the whole RFP process, make the short list and pay my own way to travel to their corporate headquarters to present my proposal and answer questions. I eventually win the contract and then go though signing all the paperwork which of course is totally one-sided in the large company’s favor. Then I spend a few hours preparing for the project kickoff meeting phone call and get on line 15 minutes early and no one shows up. Then I find out it was cancelled 5 minutes before the meeting start time!

The project kickoff gets rescheduled a month later and then again it gets cancelled, at this time with 2 hours notice. Then the project gets delayed indefinitely and finally nothing ever happens. And no offer to pay me for the time I spent preparing the detailed project plan and getting ready for the aborted kick off meetings.

Experience Two – I get asked to prepare a bid to develop and deliver some training around a particular topic that the company tells me is urgent and needs to be delivered within a few months. I go through 3 meetings with three different groups of people and told I am selected and the contract paper work begins.

Large corporations love to give us entrepreneurs pages of legal crap to review that is all written in their favor.

Again I review 20 pages of totally one-sided legal crap and asked if it is OK to sign or if I desire any changes. Since the training is needed ASAP and while the legal team reviews the paperwork, they ask me to prepare some of the initial training material to review with a dozen leaders who will be rolling out the training to their teams. The meeting goes well and I was told that the team loved my content.

Then instead of the contract coming back to sign, I am told that some other people wanted to “revisit” the training and consider some other approaches. After no word for 2 months, I reach out I am told that they are now using someone else. This time I e-mailed my contact there and asked “Do you ethically feel that your company should offer some compensation to the me since I did prepare the materials and did the initial run through with your extended team in good faith that the contract was in process of getting signed?”

GOOD NEWS – this company did respond and offer compensation for our time spent on this project. BAD NEWS – Three months after sending the invoice still no payment.

• These same companies that act this way spend a lot of time promoting how they support small businesses and have programs to assist entrepreneurs. How they actually act is in total conflict with what they are saying.

• These large companies most often have horrible payment terms like Net 75 or even Net 90, that is they will pay me 90 days after I do the work and submit an invoice. These firms have billions of dollars yet hold their cash to make interest while they squeeze entrepreneurs, many who are trying to survive month to month.

So thank you for reading this vent and I would especially welcome any thoughts from entrepreneurs who have had similar experiences and from large company leaders sharing their reaction to this blog. 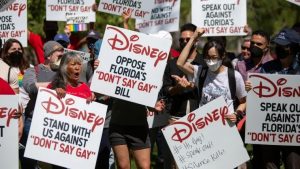 Companies cannot “have their cake and it eat it too” by claiming to be supportive of their LGBTQ+ employees, customers and community, and yet make political contributions to lawmakers who harm and demonize LGBTQ+ people. Companies can no longer straddle the fence; they must choose sides and take a strong stand as anti-LGBTQ proposals are flooding state legislatures at a record pace (link to Bloomberg article.)

The latest high visibility situation in recent news concerns the Disney company. They have long been considered a great supporter of the LGBTQ+ community, but then when the infamous “Don’t Say Gay” law restricting discussion of LGBTQ issues in public schools was voted into law in Florida, Disney at first issued a tepid lukewarm statement about the proposed legislation while donating money to politicians who were voting for it.

About a hundred employees at Disney staged a walk out in protest, and I was in full support of their action. An organization simply cannot claim they support a community, yet provide money to those people who are seeking to harm that community. Disney’s CEO has since come out with a much stronger statement against this harmful bill which basically denies the existence and legitimacy of LGBTQ+ families, and has pledged to no longer fund politicians who legislate harm and hatred of LGBTQ+ people. 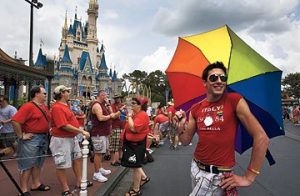 Disney has their annual “gay day” at their theme parks, but do they really stand with us, or just want our money? Photo from Shaul Schwarz for TIME

It is a common practice (yet a very bad idea) for companies to make political contributions. The concept is to support and try to elect legislators who will pass laws that will benefit your business so you can make more profit. But far too often, this places profitability over stated values and principals, and compromises integrity. And the LGBTQ+ community is not going to quietly sit by while companies throw us empty words of so-called support while giving money to those who harm us.

First, kudos to my former employer IBM. They are one of the very few large companies that has never made political contributions. (Read their governance statement about this.)

Second, the Human Rights Campaign (HRC) which annually measures and scores companies’ LGBTQ+ support through their corporate equality index (CEI), needs to take a much more rigorous look at this. So many companies are now scoring 100% on the HRC scorecard, but I think much of it is empty words and platitudes instead of real action. HRC does have a practice of deducting 25 points from the rating of any company that does harmful things against the LGBTQ+ community, and now they need to uncover any company that contributes money to lawmakers who vote for anti-LGBTQ laws smack them with a “minus 25.” HRC, are you listening?

The LGBTQ+ community and our allies must continue to speak out loudly against any company that contributes money to politicians who harm us, including boycotts and walkouts, until this arcane harmful practice ends.