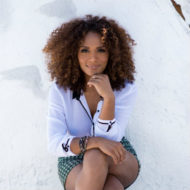 As a diversity consultant with a deep expertise in LGBT (Lesbian, Gay, Bisexual, Transgender) diversity, I have often heard of young transgender activist and media superstar Janet Mock, but had never seen her. Therefore, I was thrilled with our North Carolina SHRM (Society of Human Resource Management) Conference planning committee scheduling Janet as this year’s North Carolina kickoff keynote speaker. And the timing is perfect as more transgender people are visible in our work places and as North Carolina continues to struggle with the negative impacts of our horrific anti-trans, anti-gay HB2 bill. (see my recent blog on the five impacts of HB2 on our state.)

Janet’s talk and her gracious telling of her personal story truly helped raise the awareness of what transgender lives are really about. I heard so many attendees exclaim that they were so moved and learned so much from Janet’s keynote. Particularly poignant was her vulnerability in sharing her personal story, including how she totally lived as a woman in graduate school and early career before even disclosing she was transgender.

Some of Janet’s key points included:

• That HR professionals need to take the lead in embracing the differences of others, building coalitions across differences, building a culture where differences are valued … this can be a huge strategic business advantage.

• As a black, female, native-Hawaiian transgender millenial, Janet shared that she cannot fit into “one box” as which often happens with identifying someone’s diversity. Many people now incorporate several aspects of diversity and difference.

• Transgender individuals often have very difficult lives as they are thrown out of their homes and end up unemployed on the streets and in prison.

• Issues are so often not addressed because we are afraid of difference. Instead we should ask “who is not in the room” and create a space where there can be open dialogue among a diverse set up people.

• HR professionals should invest time in reading about and learning about people living in their “other-ness.”

I join many others in thanking Janet for making her first trip to North Carolina during a time when our state laws are unwelcoming to and creating a hostile environment for transgender people.

From the NC State SHRM conference website with lots of links: Janet Mock is the New York Times bestselling author of Redefining Realness and the host of So POPular! — a weekly MSNBC digital series about culture. One of Oprah’s “Supersoul 100,” she is a sought-after speaker and the founder of #GirlsLikeUs, a social media project that empowers trans women. Since 2011, she’s become one of the most influential trans women and millennial leaders in media.

Take my 12-question organizational transgender awareness self-assessment to gauge how trans-inclusive your organization is.