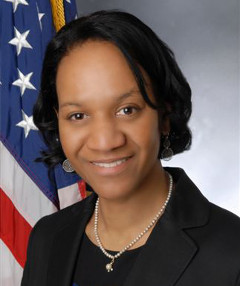 Last week I was invited to attend a “Meet and Greet” with one of the USA’s five EEOC (Employment Equal Opportunity Commission) Commissioners, Charlotte A. Burrows, in the EEOC’s downtown Raleigh office. I received the invite since I am an officer of the Raleigh Business and Professional Network, Raleigh’s National Gay & Lesbian Chamber of Commerce’s affiliate chapter.

The reception started with each of the 25 attendees greeting and introducing ourselves to Ms. Burrows in a reception line, then introducing ourselves briefly to the group, this followed by a 20 minute overview of the EEOC’s current top priorities and a Q and A session. I was extremely impressed with Ms. Burrows (link to online profile), who has her Bachelors Degree from Princeton and Law Degree from Yale. And I came away from the meeting proud of my country for having a body like the EEOC which is diligently and effectively assuring full rights for all workers in our country.

Ms. Burrows then quickly discussed several of the major areas the EEOC was working on:

1. Focusing on retaliation charges since they are the largest percentage of cases brought to the EEOC at 43% of the total. She also stated that retaliation is most often the easiest charge for people (juries) to understand.

2. Equal Pay for Equal Work. When equal pay for women was introduced by President John F. Kennedy in 1962, the pay differential between women and men was 41 cents on the dollar. That has now been cut in half to 21 cents, but that is still too large. Even normalizing for time in the position and other factors it is still 7 to 8 cents. The EEOC is studying lots of data to identify the hot spots or largest environments for gaps in pay so they can be addressed.

3. Providing stronger guidance on pregnant employees since there is still too high an instance of employees being fired for being pregnant.

4. LGBT (Lesbian, Gay, Bisexual, Transgender) concerns. The EEOC believes that sexual orientation and gender identity are indeed covered under Title VII, and they are vigorously addressing this kind of workplace discrimination. UPDATED April 28 – Link to part 2 in which I expand on the LGBT area.

5. Protection of vulnerable workers within the “underground” economy, a large number of them being undocumented immigrants working in the farming industry. She mentioned some horrific cases such as one employer routinely raping female employees with impunity since the women were powerless to report this abuse.

6. Diversity of police forces. The EEOC is teaming with the Justice Department and collecting best practices from police departments that are successfully diversifying their forces to be more representative of the communities they serve,

I am very encouraged by the work of the EEOC to ensure that every worker in our country receives fair treatment and equality under the law, which is truly the “American Way.”

Link to part 2 in which I expand on the LGBT employment discussion.