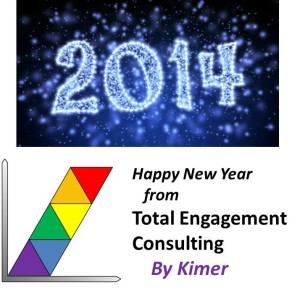 As we end 2013 and enter the new year, 2014, I would like to quickly recap my “top 7” blogs of the year based on number of hits. I average about 30 blog entries per year, mostly around my two areas of consulting expertise: Diversity with a specialization in the LGBT (Lesbian, Gay, Bisexual, Transgender) workplace and marketplace; and career and skills development based on my innovative Total Engagement Career Mapping process.

Number 7: This blog, actually published in April 2012, was still number 7 this year, “I Was a Victim of Stereotyping … and It Hurt!” As a white man in the US, I do not often experience the horrors of stereotyping that many minority communities do in this country, but in one case I was judged and stereotyped, and it really did hurt.

Number 6: From May of this year, “Five Important Ramifications of NBA Pro Basketball Player Jason Collins’ Coming Out” as a gay man. After the media hype died down, I shared some long lasting implications of Jason Collins coming out. I also shout out to this year’s WNBA’s first draft pick, out lesbian Brittany Griner.

Number 5: A special satire piece I wrote for Labor Day in early September, “The Largest Threat to the American Economy and Entrepreneurism!” What I share from personal experience as the largest threat may surprise you.

Number 4: Actually this was a blog originally published in 2011 and I am very glad to see it still getting a lot of readers, “Three Components of Diversity Training.” When I was asked to submit a bid to a Fortune 500 firm for design and delivery of a one-day diversity and inclusion workshop for middle managers, I studied my past material and prepared my bid, and realized that successful diversity training needs to contain three major components. You will need to click and read to see what they are!

Number 3: “Five Heroes of the Early US Gay Rights Movement.” And it truly a diverse group that includes women, men, transgender, an African-American and a religious leader.

… and my Number 1 most read blog in 2013: “Five Common Misconceptions about Gay People.”

Thanks to all the readers who enjoy and share my blogs. In 2014, if you want to be notified each time I do publish, you can like my business facebook page (Link), or if you subscribe to my monthly e-newsletter, I include a short summary and links to the past month’s writings.

Wishing all my readers a wonderful 2014 filled with much contentment and success!