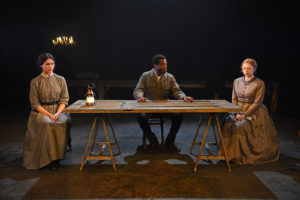 As a diversity consultant, I feel the performing arts can be a powerful medium to address many social issues such a racism, homophobia, ageism, economic inequality and more. Sometimes people need to be transported outside themselves and their daily lives to see something on stage or hear something in music that can communicate to them much better than a written editorial or a political debate. I have written four blogs about this subject over the past year, including part 1 (link) of this blog about a mother / daughter pair. (See additional blogs at the bottom of this post.)

Last week I wrote about the mother, Cathy Swift. Do read more (link to last week’s part 1) about this fascinating woman who was an accomplished business woman, figure skater and now theatre director in the UK. And after speaking with Cathy I discussed the impact her daughter Rachel Swift (Stage name is Rachel Winters) is making on the world through the world of theatre.

STAN: Rachel, I just got done talking to your mother Cathy about her involvement in the theatre. How did you get involved in theatre yourself and was your mother an influence in that?

RACHEL: My mother has definitely had an impact on me being an actress. She took me to my first theatre show when I was about four. It was a staged version of Postman Pat and apparently I watched wide eyed in amazement. Ever since, she has enjoyed taking my sister and me to the theatre on a regular basis. When I was about seven, I joined the local amateur dramatics group and that’s where my love for theatre blossomed. I loved socialising and working with people from different backgrounds and of different ages, and that’s one of the things that I continue to love today when I’m working on a production. As well as the local group, I started to do a lot of school plays when I joined my Upper School at thirteen. I had a wonderful drama teacher and he was a huge inspiration to me. It was when I met him that I realised I wanted to act professionally.

STAN: What have been some of your biggest joys and struggles working in the theatre? 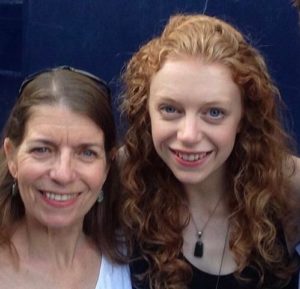 Mother and Daughter Cathy and Rachel Swift are making an impact in their community through their involvement in theater.

RACHEL: The joys of working in theatre are when you’re working! The people are wonderful and I’ve made some brilliant friends. I’ve worked at some beautiful and prestigious theatres – I’m currently in rehearsals for a production of ‘Much Ado About Nothing’ at Shakespeare’s Globe. I’ve always been interested in people and that’s one of the things I love about acting. The process of understanding a character and working out why they behave the way they do. It can be challenging but it’s a challenge I relish. The main struggle with being an actor is the part where you’re not working. When you come to the end of a job, you often don’t know when the next job will start, and that can be scary. As well as feeling unfulfilled during these times, you can also find yourself without money, as finding flexible work that pays well is difficult. It is something actors are constantly battling with and you have to really love it and care about it to keep on going. It’s also very competitive – getting seen for parts can be difficult, even if you have an agent, and it’s not just about how good you are. A lot of it depends on looking right and fitting other criteria.

STAN: I understand that you have now started a work called Fair Play (link), which aims to use drama and role play to teach children about human rights, gender equality, anti-bullying etc. Can you tell me more about what triggered your desire to start this group? 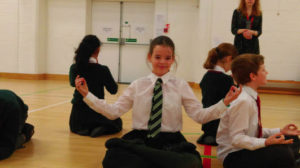 Fairplay uses fun exercises, role play and games to help children explore a point of view outside themselves, and to feed a healthy and compassionate culture in the classroom.

RACHEL: I’ve been wanting to set up my own business for a couple of years now, partly as a way to gain some control. I love acting but I need something else that I do that (a) pays the bills and (b) I feel proud of. After a couple of business ideas that weren’t quite right, I found myself exploring Fair Play. I’ve become increasingly more aware and passionate about gender equality over the past couple of years and it’s very much at the forefront of my mind. I also work as a theatre practitioner at Shakespeare’s Globe when I’m not acting, so I have a lot of experience with leading drama-based workshops for children. Fair Play therefore made sense. As well as having the relevant experience, I really care about equality and believe that the key to change is education. After discussing the business idea with teachers, I realised that instead of just doing workshops on the niche subject of gender equality, it would be more valuable to explore equality as a whole.

STAN: What are some of the activities that Fair Play does to achieve its mission?

RACHEL: I recently did my first set of workshops at a school in Woking (a town just outside London). One exercise that the children responded brilliantly to was a game I call ‘Islands’: You’re shipwrecked on a desert island and you’re the only survivors. Create a freeze frame of you on the boat during the storm. There is plenty of food and water on the island. As a team, you have to create a whole new society. Write 6 human rights for your island. There is another storm and one person is swept away to another island (so one student from each group moves to a different group). Create a short scene where the new member of the island breaks a rule. How do the others deal with it badly? Do the scene again but change it – how do the people on the island deal with the broken rule in a more fair way?

STAN: How can my readers get involved in assisting or supporting Fair Play?

RACHEL: The full launch of my business is due to be in April. So far I’ve been in the testing phase – working closely with a school to gather experience and perfect the workshops. At launch, I’ll only be contacting private schools about my business as I am aware state schools won’t have the budget to fund it. However, as my business is centered around human rights the goal is to offer subsidised workshops to schools who can’t afford it. If you or anyone else you know can help finance this in any way, or help promote by business, that would be really valuable. Here’s a link to my Patreon page. It’s a really inexpensive way to contribute directly to human rights education in the schools that need it most.

STAN: Thank you for sharing about your life and work with me and I wish you the very best of success with your acting career and your new business.

My other blogs about social issues being addressed through the performing arts: