This blog is loaded with links – do use them!

Over the past 2 months there has been a lot written about the recent draconian Russian laws attempting to crack down on gay people and any form of promoting LGBT equality. There have been discussions of boycotting

Russian vodka, moving the 2014 Winter Olympics out of Sochi, Russia, and US President Barack Obama even cited unhappiness with the Russian LGBT oppression as one of his reasons for canceling an upcoming meeting with Russian President Putin (link). See also recent NY times “op ed” by well-known playwright and actor Harvey Fierstein.

But what is the underlying psychology behind any leader seeking to demonize or bully any group? My belief is that any leader of a major world power is in a pitiful state of mind if the only way he can build support for his regime it by demonizing and setting up the populace against a minority group. That so often is the psychology behind bullying – that a person feels so poorly about their own self esteem that they need to promote themselves by putting another group down.

Instead, any entity seeking to grow and improve should be practicing the psychology of diversity and inclusion instead of bullying and exclusion. When every member of a diverse group is valued for their uniqueness and given the opportunity to grow, flourish and contribute, the whole group is lifted up. At the opposite end, when any group is demonized, they feel excluded, may then move into destructive behavior and become an oppressed drain on the entity instead of a contributor (See my 2010 blog on the Macroeconomic of Gay Bullying).

Unfortunately, Russia is not the only place in the world where LGBT people are routinely bullied. This problem is common in many places around the world and the US Department of State is even trying to make global positive impact on thsee issue (see my August “Business of Change” blog on these US efforts.)

And we still have the bullying issue against LGBT people here in the United States, particularly in our schools. Young people just entering adulthood and naturally struggling with their own self-esteem often turn to putting others down to feel good about themselves. This week I have been attending the annual North Carolina Gay and Lesbian Film festival, and two of the “shorts” have poignantly addressed this issue of LGBT youth bullying: 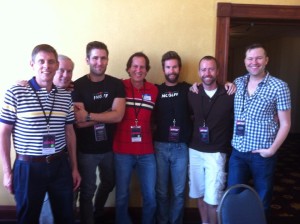 Blog author Stan Kimer is in the red shirt with movie producers, actors and other patrons at the NC Gay and Lesbian Film Festival

• In “The Symphony of Silence” a gay teenager commits suicide after enduring horrific bullying both in his school and at home.
• “Live to Tell” has a happier ending as friends at school unite to form a “gay / straight alliance” after a gay student is beaten up by a bully.