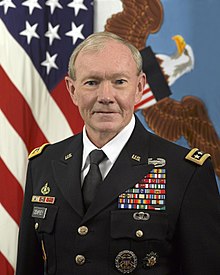 NOTE: At the bottom of this blog, please see links to my previous blogs about past Ignite sessions.

For the past few years, the Levin Jewish Community Center in Durham, North Carolina has offered a unique innovative series called the “Ignite Talks,” a networking and educational forum offered to members of our local community. Through talks and interviews with business and community leaders, (often very high power, nationally-recognized leaders), the series provides a unique venue to promote social responsibility, community building and continuing education.

Another outstanding session on November 19, 2018 featured General Martin Dempsey, who served as the US Chairman of the Joint Chiefs of Staff under President Barack Obama.

Mr. Dempsey’s Topic – Radical Inclusion. I was totally intrigued with the combination of this particular topic and speaker given the US Armed Services oft-reputation of struggling with some issues around diversity. And I was fortunate enough to win one of his books, “Radical Inclusion – What the Post 9/11 World Should Have Taught Us About Leadership.” I look forward to reading it and writing a blog about it in 2019. 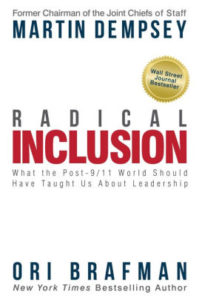 I was so pleased to be one of the winners of General Martin Dempsey’s book.

Some of the main points of Mr. Dempsey’s discussion at the Ignite Session include:
• Everyone is some kind of leader somewhere in the lives, and everyone shares the same impediments to leadership.
• Inclusion is a key theme in leadership as the world continues to change rapidly.
• Leaders are under much more scrutiny these days.

Three key reasons why inclusion is so important for leadership:
• We need to seek knowledge from a wide circle of diverse expertise to lead in a complex world.
• We need partners!
• Joint inclusion solutions are more affordable. It is often more expensive to “go it alone.”

Additional points made included:
• You need to be confident enough in your leadership to delegate and give up control.
• It is very important to be open to continually learning. Example: President Obama would frequently ask his staff to “surprise him” by providing some new input that he didn’t already know.
• Leaders know how to imagine and energize people intelligently and innovatively.
• Leading through influence instead of exerting authority may take longer, but will result in stronger buy-in.

I thank Ignite and General Dempsey for all these wise insights, and I look forward to more of these Ignite Sessions in the future.

My earlier blogs about past Ignite sessions:

From October, 2017, “The Art of Money” with David Rubenstein, one of the wealthiest people in the world. 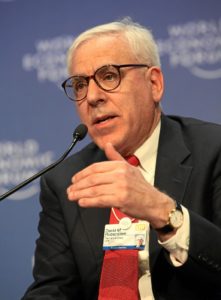 One of the most engaging series of events here in the Triangle, NC area is “The Ignite Talks” hosted by the Jewish Federation of Durham – Chapel Hill at the Levin Jewish Community Center in Durham. Ignite is a networking and educational forum offered to members of our local community. Through talks and interviews with business and community leaders, the series provides a unique venue to promote social responsibility, community building and continuing education.

This season’s series theme is “The Art of ….” and the first session dealt with the art of money – Making money, investing money and then giving money away. Speaker David Rubenstein, with a net worth of over $2.9 Billion, is among the wealthiest people in the world. He was a delightful fast-paced speaker with just the perfect dose of humility and humor.

Currently, Mr. Rubenstein is the Co-Founder and Co-Chief Executive Officer of the Carlyle Group, a global alternative asset manager with $174 billion of assets under management. He grew up in a blue collar family in Baltimore, Maryland, with his father working as postal services worker earning $7,000 annually and his mother a housewife. He attended Duke University on scholarship and law school at the University of Chicago. He was a deputy domestic policy advisor to President Jimmy Carter and worked in private law practice before entering the equities business.

Most notably, Mr. Rubenstein was among the initial forty individuals who have pledged to donate more than half their wealth to philanthropic causes or charities as part of “The Giving Pledge.”

Key points and quips Mr. Rubenstein made during his delightful talk and Q and A session:

• He has always been inspired by the President John F. Kennedy’s quote that “A lot of money does not equal happiness.” Throughout the talk, I could easily see that Mr. Rubenstein has never defined himself by the huge wealth he has accumulated.
• He started in the equity business with 4 investors providing $5 Million with plans to build a totally different and innovative type of investment business. His quote: “Do something no else has done before – people may make fun of you, but you can succeed.”
• Mr. Rubenstein defines philanthropy from its Latin root meaning of “loving humanity,” not as “rich people writing checks.”
• Mr. Rubenstein felt he had 4 viable alternatives for his wealth:

1. Be buried with it like the pharaohs of Egypt
2. Spend it all on houses, planes and artwork
3. Give it all to his children and ruin their lives
4. Give it away while he is alive so he can see the benefit it reaps. This is the option he has chosen. 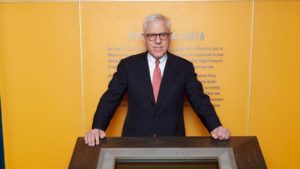 Mr. Rubenstein with the one of the four original copies of the Magna Carta, that he specifically purchased to share with the public. (photo: David Yellen for Forbes)

• Quote: “When your mother says she is proud of you, then you know you have done the right thing.”
• When asked about the US political situation, he decried the “hollowing out of the political center” leading to the polarizing politics of today with sides that cannot work together for the common good of the nation.

I look forward the next installment of this Ignite “The Art of ….” series, and if they are as inspirational and interesting as this one, be looking for another blog!

My blogs about Ignite sessions from earlier years: