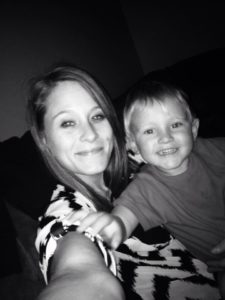 10 years after attempting suicide, Lacie Childers is a newly pinned Registered Nurse and the happy mother of active 4-year-old Ian.

I thank Betsy Rhodes, the North Carolina Area Director for the American Foundation for Suicide Prevention (link) for suggesting this topic and providing Lacie’s story.

I continue my monthly blog series based on US Figure Skating’s popular “Get Up” campaign which shares the message that life, like the ice, is hard, and we can certainly fall on it. But the more times we get up and persevere, the stronger we become. Since May is Mental Health Awareness Month, my May installment focuses on the very serious issue of suicide.

There is such a stigma around suicide; that somehow people who contemplate ending their lives are seriously beyond repair and that this is something to be very deeply ashamed about and not discussed. However, continuing on the theme of “Getting Up;” with the appropriate assistance and resources, those who consider or attempt suicide can “Get Up” from this low to move on to healthy, productive, fulfilling lives.

Let me share one story from 25-year-old Lacie Childers from Forest City, NC. Lacie had struggled with mood disorder with frequent chronic thoughts of suicide since puberty. Then at the age of 15, things came to head in one day: someone made fun of her from having a speech impediment, she heard that her boyfriend was seeing someone else, and she failed a test. Fortunately, her suicide attempt that day was not successful.

It would have been be very easy for Lacie to just give up on life and continue falling into despair, but instead she “got up” from her situation to move ahead into a promising future. She recently graduated from nursing school and is a newly pinned RN, is the mother of a very active 4-year-old and is the Walk Chair for the Rutherford County “Out of Darkness” Walk.

Here are several helpful points that Lacie shares with others who may be having these same struggles:

• Lacie realizes that having a support team and a safety plan are her most critical tools. Her support team is aware of her stressors and triggers, and when they may be needed to help Lacie take precautions to keep her safe.

• That self-care is very important in “getting up” and that includes complying with medication and therapy regimens.

• That people do indeed have options when it comes to their care and that they can be their own strong advocates. For example, if you do not like your doctor or therapist, you can find a different one. Or you can reach out to a peer support specialist if you don’t feel you are getting the assistance you need.

• Having this mental illness in no way means that Lacie is inferior or incompetent, or that she cannot have an exciting fruitful career and life ahead. In fact, her own experience may even better prepare Lacie to provide the best nursing care for her future patients.

Thank you, Lacie, for “Getting Up” and sharing this inspiration!

And I would like to close this blog with four actions that my own church denomination (Metropolitan Community Churches) encourages during Mental Health Awareness Month:
1. Learn more about the facts of mental ill health and related issues.
2. Challenge our own and other’s negative attitudes and stigma.
3. Talk and reduce isolation.
4. Become more aware of local sources of help and support.

Link to the American Foundation for Suicide Prevention for more info and resources.

Link to my skating blog page which contains links to my first four “get up” blogs. 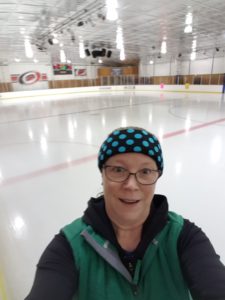 Christy Hayes got up and back on the ice after a life-threatening head injury. Now she skates with a stylish protective headband.

See links to the January – March issues of my “Get Up” Blog at the bottom of this one.

I continue my monthly blog series based on US Figure Skating’s popular “Get Up” campaign which continues to share the message that life, like the ice, is hard, and we can certainly fall on it. But the more times we get up and persevere, the stronger we become.

Often, falls for adult skaters can be more catastrophic than for young children who seem to quickly bounce off the ice and skate on after a fall. So it takes extra strength and courage for an older skater to get back out there on the ice.

When I was soliciting examples of adult skaters getting up after a fall or illness, I got so many, I need to save some for part 2, so here we go!

Christy Hayes writes: I had an unwitnessed fall three days before testing bronze moves. Two kids found me in a pool of blood and thought I was dead. I woke up hours later in the ICU, lost four days of memories, and was off the ice for six weeks. I had to take several deep breaths and talk myself in to stepping back on. I’m the one you see wearing a protective headband out there. I “got up”, rescheduled, tested and passed bronze moves nine months later!

From Laurie Krueger: My story begins with a love of skating from the time I was a toddler with informal skating on frozen ponds. But then as an adult, I started to take lessons, moving up through the various levels pretty quickly. My final competition was USFSA Adult Nationals in Lake Placid in 2000. However, knee injuries upon knee injuries began to sideline me with NINE meniscus surgeries (6 and 3 on left and right knees) over the next few years and then finally….the big kahuna. A knee replacement at age 55 which sadly ended my competitive skating career. No more jumping as this was my jumping leg. And two years later, the other knee followed. On top of that, a lifetime of a genetically deformed spine caused me to have a spinal fusion, further reducing my range of motion. I thought my skating days were over. 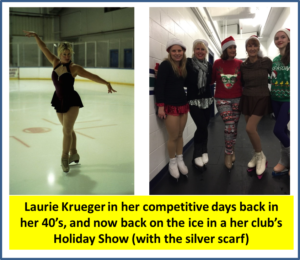 My husband and I retired from our NY jobs and moved to SW Florida where I thought I would be riding bikes, swimming and playing pickle ball. But I was depressed. Very depressed. But as luck would have it, although it’s Florida, there was a skating rink a mile from my house. Little by little, the rink drew me back in. I “got up” and started just going once a week “for fun”, but last summer finally broke down and joined the Everblades Figure Skating Club and just participated in their Christmas Show this year and now planning on my first competition in 17 years in February. No, I cannot do what I once did, but that’s ok. I have just turned 60 years old, and to be able to do a show or a Showcase competition number….well, I’m over the moon! I plan to still be doing this at 70, and if I’m lucky, at 80! This grandma of 4 is happy again to be on the ice!

Michelle Daichman was reminded by her Facebook Memories that 9 years ago she going in for her my third knee surgery. She writes: My doctor made no guarantee that I’d be able to skate again. But I love that I “got up” and proved him wrong, and get to do so every day. This is my “get up story” – never underestimate!

From Aimée Ricca: I shattered my right ankle last January while practicing 3-turns. I now have a titanium plate 8 screws and 2 pins, along with something called RSD/CRPS (a rare nerve disease). I spent 2 months not being able to walk at all, another month in a boot, and then finally the challenge of learning how to walk again! But I “got up” and returned to the ice 1 May of last year and used skating as part of my rehab. 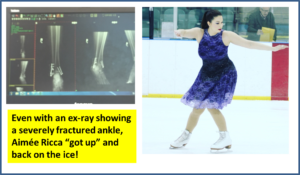 In December, I performed in my arena’s holiday show. Then, I performed the same basic program for a local competition and was award gold. I began jumping in January and was able to compete at Adult Eastern Sectionals with only having waltz jumps in my Pre-Bronze Free Skate, I placed 6th out of 7, which I say isn’t bad for only having waltz jumps! I competed at my club’s big event, the Morris Open, this past weekend and got the silver medal (full disclosure, there were only 3 competitors). I am now working on adding my toe loop and salchow. It’s a challenge every day because every day is different with an injury! My range of motion isn’t what it used to be and the pain waxes and wanes. I will keep getting up though!

And from Karen Burgner: I competed and medaled at my first nationals in 2012… after falling during my light entertainment program, getting up and finishing to take the silver. Later that same year, I suffered a spinal cord accident after two of my kids jumped on me. After emergency surgery and months of therapy I learned to walk again… and skate again, and got up and returned to national competition in 2015 – and I took silver in bronze 2 ladies free skate at nationals last year!

I hope these stories inspire you that even with bad falls, injuries, and illness, our love of skating can spur us on to “get up” and back on the ice, even if the rehabilitation period is several months.

Earlier “get up” blogs:

January: Introduction to the “Get Up” theme with figure skating examples

February: Stories of Adult Figure Skaters “Getting Up” After Illness and Injury, part 1

March: Getting Up after Career and Vocation Falls. Read these four short inspiration stories of how these people “got up” to move on after falls and troubles in their vocational lives.