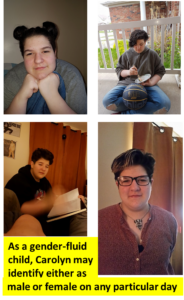 In by last blog, “A Diversity and Inclusion Case Study – Getting it Right” I shared the story of a Men’s Clothing Chain whose customer service representative and store manager did a wonderful job of addressing the concerns of a mother wanting to find a nice suit for her gender fluid child to wear to primary school graduation. I promised to share a little more about what gender fluidity is and more of Innes’ (the mother) and Carolyn’s (the child) story.

The “Gender Diversity Education and Services” website had about the best description of what gender fluidity is. They provide this definition, “Gender fluidity conveys a wider, more flexible range of gender expression, with interests and behaviors that may even change from day to day. Gender fluid people do not feel confined by restrictive boundaries of stereotypical expectations of women and men. For some people, gender fluidity extends beyond behavior and interests, and actually serves to specifically define their gender identity. In other words, a person may feel they are more female on some days and more male on others, or possibly feel that neither term describes them accurately. Their identity is seen as being gender fluid.”

Now read the story of mother Innes Clodd telling us about her gender fluid child Carolyn:

“It’s hard to know where to begin, as this really has been more of a journey than a one-time event. She came to me when she was much younger, maybe 9, and said she thinks maybe she was transgender. I really had no idea how to react, what to think, how to feel; it was confusing at best for me, never mind her.

I accepted what she had told me and made some calls, set up some meetings and helped her get in touch with some resources that could help her make sense of what she was feeling. One of the groups had a parental unit, so I attended that group; it was quite helpful, but at the same time, added to my confusion.
As time went on, I decided it was best to let Carolyn set the pace, and I would follow her lead. She had changed her name to August, and the school was very supportive with her decision. He decided he didn’t really like that name, so changed again to Kryss. Again, there was a fairly supportive environment. There are 2 older brothers in the family, who tried to be supportive, but most of the time it came off as making fun, although they did apologize, in a way that boys do, for hurting his feelings.

Again, time goes on, things seem to be going ok, then my partner at the time, who is not the biological father, started to call him names, like “thing, it, whatever.” This spurred many arguments, since I will go to the ends of the earth for my children. Finally it is over, he is gone, the energy calms. Kryss then reverts back to Carolyn, but cannot decide which pronoun to use, neither one feels 100% right. At that point she states that she is gender fluid. Honestly, I had no idea what that even was, I had to look it up.

We moved away from that town, as my ex was stalking us, to a whole new place. The only downfall, it was Carolyn’s last year of her primary school. She was very sad to leave her friends behind, and really had a hard time making friends this past year, as she knew that we would be moving again this summer, so she would again be in an environment as a complete new comer. 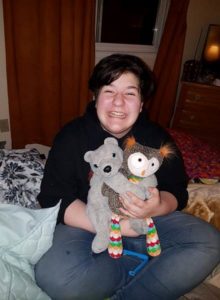 Regardless if she expresses herself as a girl or a boy, Carolyn’s joy of life shines through a beautiful smile.

During the past school year, she talked to me a lot about how she was feeling, the struggles she was having, and also the times when she was accepted for being who she was. On any given day she could identify as either male, female, or sometimes flip flop over the course of the day. Her main struggle seemed to be which category she fit in to. I told her not to put herself in a box, not to label herself, and that she did not have to fit in to any category as long as she was happy, being true to herself, her identity would come in time. There were many conversations, and many tears shed. My heart was breaking for her, but all I could do was listen and be supportive.

Then came time to talk about primary school graduation, something I was secretly not looking forward to. Then the words came out of her mouth, as I knew they would “I want to wear a suit to grad Mum”….

… and you will have to read my previous blog to see how the story of the graduation outfit turns out!