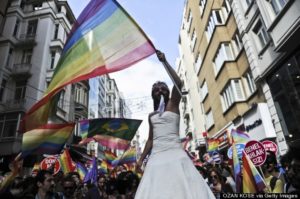 One of the largest gay pride parades in a predominantly Muslim country is in Turkey. (Photo credit OZAN KOSE/AFP/Getty Images)

This blog is loaded with lots of links – please do explore them!

This is my third and final segment of my blog series on Muslim diversity. In June I published “Islamophobia – a growing US diversity issue,” where I provided some background and issues with Islam in America. Then in late July, I published “Workforce Diversity – Islam (Muslims) in the workplace,” where I discussed three particular items to consider about supporting Muslims in our workplaces. And since I am a diversity consultant conversant in all areas of diversity, but with a deep expertise in LGBT (Lesbian, Gay, Bisexual, Transgender), I always like to include a little more information about LGBT issues within various diversity discussions.

1) LGBT people exist within the Muslim religion and culture just as they do in every single country and race on the face of the earth. Though there are still some people who believe sexual orientation is a choice, most medical professionals and now a majority of US citizens believe it is an inherent characteristic that people are born with and that pervades all aspects of humanity.

2) There is a diversity of views within the Islam community about LGBT and how it relates to that religion. In fact, there are many parallels with the issue of LGBT within the Christian faith.

a. There are some Muslims who believe that being LGBT is a grave sin and against the tenets of Islam

b. There are some Muslim LGBT people and allies who believe that the original and pure teaching of Mohammad does not condemn LGBT people but instead welcomes and respects all. One such ally is Ani Zonneveld of Muslims for Progressive Values (link) 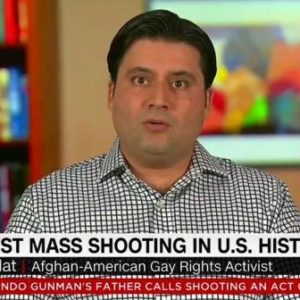 Nemat Sadat in his CNN interview with Christiane Amanpour, CNN’s chief international correspondent, who’s based in London and airs her nightly global affairs show that’s broadcasted to 200 million households and hotel rooms around the world.

c. And there are some Muslim LGBT people who believe that Islam at its core is a violent and anti-gay religion that needs to be rejected by LGBT Muslims. One example is self-described “Afghan American ex-Muslim LGBTI Rights activist” Nemat Sadat (photo to the left.) (Link to his Linked in profile). See also his Huffington Post article, “When Will LGBT Equality Reach the Muslim World?”

3) There is a variety of resources and organizations addressing the issue of LGBT tolerance and acceptance in the Muslim community. My own pastor in Kenya (see information on my community work in Africa) received a grant from the Arcus Foundation to hold workshops with Muslim clerics on being more LGBT tolerant. In my own state, the North Carolina based Movement to End Racism and Islamophobia (link) includes acceptance of LGBT people in its work. Additional national and global resources and supportive organizations can be found in this short post from “Islam and Homosexuality.”

Bottom line, I feel strongly that all kinds of organizations: companies, governments and yes, even religions need to strongly promote acceptance and inclusion of all diverse people and eliminate all forms of hate and ostracism.