In last week’s blog, part 1 (link) I introduced the general topic of the strong connection between diversity work and housing issues, and highlighted many of the key points made at an all day Fair Housing Conference I had attended in the Spring.

This week I would like to expand on how housing issues impact the LGBT (Lesbian, Gay, Bisexual, Transgender) community and provide links to some interesting stories and resources in this area.

1) There is no universal national protection for housing discrimination against LGBT people. Many people incorrectly and naively assume that LGBT people are offered the same protections against discrimination as people of different genders, races, religions, etc. In his closing speech at the 2013 Raleigh Fair Housing Conference, Bryan Greene from the US Department of Housing and Urban Development stated, “that it is quite remarkable that in today’s world, that the federal housing statute does not yet include sexual orientation, though some states and municipalities have added it.” Mr. Greene also shared that the US executive branch has issued a regulation that recipients of FHA grants, Section 8 and Public Housing Assistance cannot discriminate based on sexual orientation, which is a great step in the right direction.

2) In fact, there is serious housing discrimination against LGBT people. In June of this year, the US Department of Housing and Urban Development (HUD) issued a study they commissioned in conjunction with the University of Albany, State University of New York. (link to article.) Some of the findings included wide spread discrimination in across almost every market, and that gay male couples experiences more discrimination than lesbian couples. (see also ABC news story) 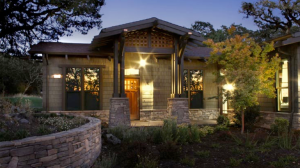 Fountaingrove Lodge, an LGBT retirement community in Sonoma, California has a main building with multiple units and individual homes like this beautiful bungalow

3) A fast growing area of discussion is LGBT senior housing. Safe and affordable housing for LGBT seniors is a growing hot topic among advocates for aging LGBT populations. There are new projects across the country seeking to bring solutions to the table, especially where LGBT people will be totally accepted – for example even having same-gender partners being able to share a unit or room together and be provided LGBT-competent health services. The North Carolina LGBT bi-weekly paper QNotes featured an excellent detailed article (link) about this.

4) There is a growing number of LGBT-affirming housing solutions emerging in our country. Here are three example:

• The Carol Woods Retirement Community, here in my own state of North Carolina, is a welcoming progressive community which even placed an ad recently in QNotes, North Carolina’s LGBT bi-weekly paper and invited me to speak to their staff and residents about LGBT diversity
• There was a full page ad in a recent Gay and Lesbian Review (bi-monthly magazine) for Fountaingrove Lodge, a new retirement community in California exclusively for the LGBT retirement community.
• Innovative real estate entrepreneurs Todd Shipman and Steve Strode (who I met at the 2013 NGLCC Leadership Conference) have formed rEqual (link), a business partner and advocacy group connecting professionals engaged in the real estate industry with the LGBT community. And the National Association of REALTORS® (NAR) recently awarded a Diversity Grant to the Oregon Association of REALTORS® (OAR) to take rEqual from concept to reality. 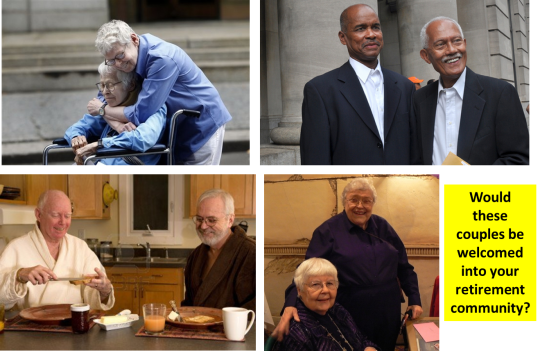 Again, this blog is loaded with many useful and interesting links which I hope you will explore! (Bolded underlined)

In Part 1 of this series (link) I provided a general introduction to the topic of aging and shared some personal experiences I recently had which inspired me to write this series of blogs. Now I will write parts 2 and 3 in conjunction with the two core areas of my consulting practice – part 2 in relation to LGBT diversity and part 3 in relation to career development.

I appreciate the work of SAGE (Services and Advocacy for GLBT Elders) which provided many of the below points.
First, some general facts about the aging LGBT population:
1. It is increasing rapidly and with the shift in culture, more older LGBT people are “coming out.” Recent estimates suggest that there are over 1.5M LGBT people over 65 in the USA and that will double by the year 2030.
2. A higher percentage of LGBT elders face financial hardships due to job benefit and social security inequities, and fewer family members to help care for them.
3. LGBT elders deal with a significantly higher rate of mental and physical health disparities. 39% of LGBT elders have contemplated suicide and 53% feel isolated from others (over double the general population)
4. Many LGBT elderly people face discrimination and stigma in the lives for our country’s systems that support the aging.

Many of these issues are even amplified for the aging transgender population. Many of these issues arise from the fact that many of today’s aging services providers are ill-equipped to provide competent and nondiscriminatory services to address the unique needs to transgender elders, and some health issues remain from barriers faced to receiving quality health care earlier in their life spans.

However, I see some encouraging signs that there is much more focus now on the intersection of aging and LGBT, and this emphasis must continue to development. There are growing resources for LGBT elders and their allies through organizations such as:
• SAGE (link)– Services and Advocacy for Gay, Lesbian, Bisexual & Transgender Elders. They also have many local chapters associated with local LGBT Centers.
• AARP (link) – An Ally for Real Possibilities. If you do a search on their website search engine on LGBT – you will find that they produce a large number of their resources for the LGBT constituency.
Other hopeful signs I have seen recently include:
• The Carol Woods Retirement Community here in my own state of North Carolina, is a welcoming progressive community which even placed an ad recently in The Front Page, North Carolina’s LGBT bi-weekly paper.
• There was a full page ad in a recent Gay and Lesbian Review (bi-monthly magazine) for Fountaingrove Lodge, a new retirement community in California exclusively for the LGBT retirement community.

Also, the US Supreme Court Decision we have all been waiting on regarding the Defense of Marriage Act (DOMA) could have a huge impact on this discussion.

And I will close with a link to two more articles in the April 26 – May 9, 2013 issue of Qnotes – one titled “Focus on LGBT Aging Grows” and a second article focusing on the LGBT Senior Housing becoming a hot topic among advocates.

Look for part 3 about the link to career development and succession planning in July!