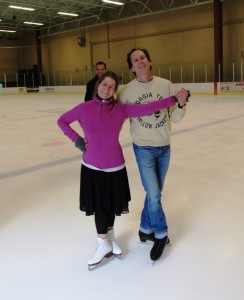 This year I once again attended the Dorothy Hamill Adult Figure Skating Camp, and my friend Cathy came over from England to attend with me!

As I mentioned in my last blog entry, like last year, I am going to be writing more personal blogs during the month of December. This blog is about an eye-opening encounter at the Grand Canyon of Arizona this past October.

Once again in 2015, I attended the Dorothy Hamill Adult Fantasy Figure Skating Camp (a most wonderful experience) in Scottsdale, Arizona. This year, a traveling and hiking friend from the UK (United Kingdom), Cathy Swift, came across the Atlantic to attend. Since Cathy had never been to Arizona, we stayed over an extra four days and I drove us to some of the treasures of Arizona including Jerome, Sedona and the Grand Canyon. While at the Grand Canyon, we had an interesting encounter.

While strolling along the “South Rim” somewhat away from the main tourist area, we met another sightseer all the way from Korea. He initially asked us for some directions in terms of the right way to proceed, where the next shuttle stop was along the rim, etc. We did assist him somewhat and then chatted about other things – our professions, his time in the States, etc. He was quite impressed that I had received my MBA from the University of Chicago Booth School of Business, and complimented me on my niceness for assisting him with directions and intelligence for my educational credentials. I even joked about the awesome song and video “Gangnam Style” (link) which was a huge hit in the US and worldwide in 2012. And he continued to sort of follow us around to keep up the conversation. 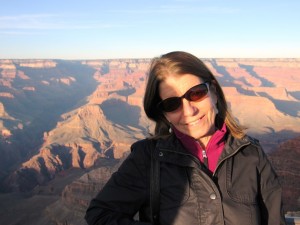 My British friend Cathy Swift on the South Rim of the Grand Canyon, where the interaction in this blog took place

I do not recall how the conversation turned to politics, but we then talked about the interesting candidates running for both the Democratic and Republican presidential nomination. I mentioned the candidates I liked because of their support for equality for all American including LGBT (Lesbian, Gay, Bisexual, Transgender) citizens.

There was an immediate and obvious change in the countenance of the Korean gentleman! He asked if being gay or lesbian was not sinful given Biblical scriptures. I then started to share how there could be different ways of viewing and interpreting scripture verses often applied to condemn LGBT people. He then stated “I guess you must know more than me about this,” and walked away and avoided us for the rest of the short hike. It was quite shocking how his perception of me as helpful, friendly and intelligent quickly shifted to that of being an undesirable person.

My friend Cathy was shocked. For more than 40 years, she has been involved in professional and community theatre, during which time she, her colleagues and friends have interacted with countless LGBT people. She told me that she had never witnessed such an interaction before, and now she has seen first-hand how LGBT people can be misunderstood and treated as “less than” by others.

Yes, it is indeed sad that still in today’s world, people are judged based on their sexual orientation or gender identity instead of being appreciated for their full human qualities.