I was very pleased to see the end of the US Military “Don’t Ask / Don’t Tell” (DADT) policy at the very end of 2010. The Policy basically stated that it was “OK” for those in the military to be gay, lesbian, bisexual or transgender as long as they “did not tell” anyone , i.e. keep it hidden. What this basically amounted to was that GLBT people who wanted to serve in the US military had to keep hidden or lie about this very important aspect of who they are.

President Barack Obama signs the Don't Ask, Don't Tell Repeal Act of 2010, Wednesday, Dec. 22, 2010, during a ceremony at the Interior Department in Washington.

Studies in the private business sector have shown that when people hide who they are at work, it negatively impacts their productivity. People need to keep track of who they have and have not disclosed their sexual orientation or gender identity to, thereby distancing themselves from coworkers and team members. They worry more about if they may lose their job or be passed over for a promotion because of who they are, and that negatively impacts their productivity. But people who can openly bring their full selves into a supportive work place can optimize productivity and devote all their energy to their work. The “Degrees of Equality” report from the Human Rights Campaign provides the details of this analysis. 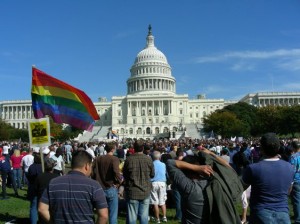 Hundreds of thousands of people participated in the 2009 March on Washington advocating for equality for LGBT people. Many spoke on the need to repeal Don't Ask, Don't Tell

Now better days are ahead for the US Military! The ending of the “Don’t Ask / Don’t Tell” policy means that the military can truly recruit the best and brightest talent, including those who may be gay, lesbian, bisexual and transgender. Studies have shown how many bright and talented people serving our country in key roles like linguistic intelligence have been dismissed simply because they came out as being GLBT. Data from the SLDN (Servicemembers Legal Defense Network) shows that thousands of talented service people have been dismissed from our military, robbing our country’s defense system of key personnel.

In my next blog entry I will write about what may be needed by the military in 2011, and the lessons they can learn from the business world.