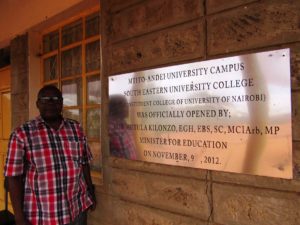 It is a privilege to work with Rev. Michael Kimindu of Kenya who is tirelessly fighting corruption in Kenya. Here he is in front of the Southeastern University College Mtito-Andei Campus, where he is making valuable community connections.

Because of my community non-profit work in Mtito Andei, Kenya (link to latest updates), I had promised to write a blog about Kenya every two or three months. In September, I started with “The Problem with Kenya … and My Hope” in which I provide a pretty harsh critique of what is holding this country back, with it’s excellent natural and human resources, from becoming a leading economy of the world. And in November, I published “A Blog from Kenya – Who Will Same Kenya?” written by a Kenyan pastor (pictured above) who is not afraid to buck the status quo and truly question the role the religious establishment should have in fighting the rampant corruption and injustice in Kenya.

I do realize that any critique I may provide is done so as “outsider” and some may question if I even have the right to offer my observations, assessment and recommendations. I do so out of a true caring for this country and its people.

When I was in Kenya in November, I picked up the newspaper “The Daily Nation” during a 12 hour (gasp) layover in the Nairobi airport. And my assessments were confirmed in that the general population of Kenya agree with my strong recommendation that the problem of rampant corruption needs to be acknowledged and addressed. Corruption is one of the major wrongs that can hold any country or organization back because it inefficiently siphons off needed resources for the good of the whole into the personal pockets of the wasteful few.

Here are some of the points raised in the article “Poll: We’re headed in wrong direction” on page 3 of the November 16, 2015 issue of “Daily Nation.”

• The three issues identified on “top of mind” of Kenyans leading to these results are: corruption, high cost of living, and lack of jobs. The high level of corruption in government was rated the #1 issue by 40.9% of the citizens.

• The national ministry of Education, Science and Technology was the poorest rated ministry by the citizens. This is a dangerous assessment given the importance of education on helping build highly skilled citizens to help compete in the global economy.

• And in terms of national commissions, the “Ethics and Anti-Corruption Commission” was the lowest rated.

International corruption measuring bodies do confirm the high corruption in Kenya; for example Transparency International ranks Kenya 139th out of 168 measured countries , which is a horrendous performance. NOTE: and we think the USA is corrupt – we rank 16th out of 168!

My sincere hope is that the people of Kenya can unite to fight corruption and elect women and men of high integrity with hearts and minds to help Kenya progress, and that bold new leaders will arise to lead with honesty and transparency. 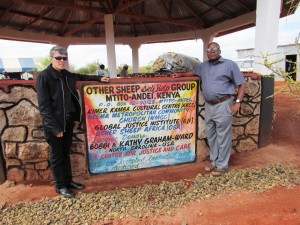 Three photos and several hot links are included in this blog! Based on a sermon from Rev. Michael Kimindu, Neema Metropolitan Community Church, Mtito Andei, Kenya

As an American who is doing community development work in Kenya (read about those efforts via this link), I published a provocative blog in September titled, “The Problem with Kenya – And My Hope” addressing the corruption and discrimination in that country. I received a large number of “Facebook Likes” on that blog as well as words of support, but also some criticism for speaking as an “outsider” instead as a native Kenyan. Therefore, I am reproducing this recent sermon with permission from a long time clergy leader (Rev. Michael Kimindu) who was born and has spent his entire life in Kenya. He expands on the themes of my recent blog.

A comparison can be drawn between Shechem of the Old Testament in Judges and Kenya today. Looking at the two, the following observation standout:
1. Corruption
2. Death

Gideon was the ruler of Shechem and all was well until his death. We are not sure if he had prepared an heir to the throne. He had seventy sons. One of his sons, Abimelech, murdered almost all his 70 brothers so he could take over power. He shed innocent blood and become king. Only one brother, Jotham, escaped to the city of Beer. Little is known of him in Beer

Shechem went down sinking in Corruption. It became a land of bloodshed. Kenya can easily pass for Shechem if the current situation is anything to go by:

The current leadership came to power to protect the two principals from the ICC (International Criminal Court) where they are accused of being the ones bearing the greatest responsibility for the 2007-08 Post-Election Violence. 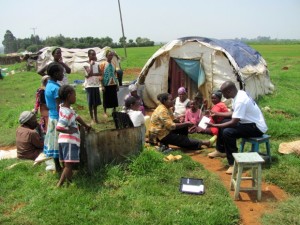 Several years after the post-election violence of 2007-2008, displaced people near Eldoret were still living in tent camps several years later.

Under their administration, the country is running downwards. Corruption is the order of the day, killings of innocent Citizens by Al Shabab and the Police have left families groaning. Those who are supposed to be the voice of the oppressed, the Religious Institutions, are part and parcel of the rot and killings.

When will the UN speak against Corruption as loud as they speak about security? Developed countries in Europe and the USA have withdrawn funding to countries where human rights, i.e. those of the same sex orientation people are abused. Why can’t they do so to corrupt Countries? 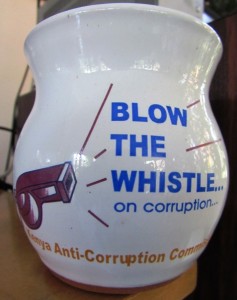 Kenya’s Anti-Corruption Campaign has been giving away these cool coffee mugs – but are they serious about address corruption, or simply paying lip service?

In Kenya today, the archbishop of the Anglican Church is the chairman of Kenya Anti- Corruption Campaign (KAC) yet his effect is never felt. The Sunday Nation of 1st November page 8 reported him calling for referendum instead of mobilizing Kenyans against Corruption. No one has ever been arrested under his watch. How did he accept such appointment in the first place? On page 6 of the same paper the Nairobi Pentecostal Church (NPC) aka Christ is The Answer Ministries (CITAM) admits a scandal involving a former Bishop and two officials where 260 million shillings is in question. Has money become the answer? We need loud voices from within and without against corruption.

With the coming in of China as a development partner, our wild life, especially elephants, rhinos and wild dogs have become more endangered than ever before. Sub-standard goods flood our markets.

Kenyans die in their numbers from poisoned brews, others have become cabbages and zombies due to drugs brought into the country by known barons who are untouchable.

Why Does the West – USA and EU continue to do business with Kenya and other corrupt countries? Are they allies to the oppressors or the oppressed? What is the church in those countries telling their leaders who are supporting corrupt governments?

Where are the whistle blowers? What stand do we take as followers of Jesus at home and abroad? Can we pass the test of omission and commission?

Yet Jesus is banking on our fruitful obedience to his commands of
1. Love
2. Making obedient disciples

Where do we stand? Are we looking the other side to avoid the injured like the Levites and the Priest in the Good Samaritan story? What motivates us as follower of Jesus? Is the Spirit upon us as it was upon Jesus to free captives, to open the eyes of the blind and announce the acceptable year of the Lord?

Look at the corruption and killings at home and abroad and make up your mind. Take a stand for the poor.

May Jesus be with us as he promised, till the end of the age, Amen.