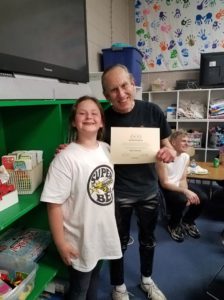 Former award winner and young skater Katelyn Mitchell of the Central Carolina Skating Club presenting me with a “Get Up Champion” award.

Just before turning 59 years old, I made a major decision which has greatly impacted my life for the good. As a passionate figure skating fan, I decided that I actually wanted to get off the couch and try skating for myself. (See my blog I wrote back then – “Finding a new passion at age 59.”) I bought skates, secured a coach, and began this journey. And it has given me tremendous joy.

And now I look back. Recently at my local figure skating club (The Central Carolina Skating Club) meeting, I was presented one of the inaugural “Get Up Champions” Awards processed through US Figure Skating. I was so touched by the write up my club’s officers submitted:

On behalf of the Central Carolina Skating Club Board of Governors, I nominate Stanley Kimer as a Get Up Champion. Stan is a relative newcomer to skating and our skating club, but he brings so much to the sport! It’s truly inspiring to see how he faces this challenging sport with humor, intelligence and outright joy. 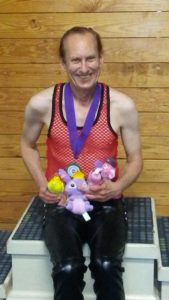 I do love to entertain people while on the ice, including stripping down to a tank top to Right Said Fred’s “I’m Too Sexy.”

Paula McKinley (my coach) and he create skating routines that can make even a curmudgeon smile – the joy of skating and entertaining people shines through brightly. The kids welcome him when he participates in summer camp or Bridge classes with them. One little girl told me that she thinks he’s the hardest-working skater on the ice because ‘it’s so hard for him to skate!’

It’s true: skating is hard, and the ice is hard, which resulted in a fractured hip back in 2016, causing him to withdraw from the Peach Open Adult competition and delaying his passing Bronze to compete at Adult Sectionals / Nationals. He’s on the ‘Get Up’ trail again – – no spoilers on his new routine.

Stan’s a ‘lemonade for life’ kind of guy, though: since he couldn’t skate at Nationals in Wake Forest, he volunteered as an ice monitor! He also volunteers at our Club throughout the year and comes to every meeting / award event, when he’s not traveling to watch competitions or attend Champs Camp. We love playing ‘Where’s Stan?’ and finding him in the stands or group photos.

One of his vital contributions to the sport is his blog series on the theme of ‘Get Up.’ He highlighted what most adults face in skating: life gets in the way, sets you back and throws obstacles in your path. As Scott Hamilton says, ‘you just have to get up and keep going.’ Stan definitely gets up twice for every falls he takes.”

I was so honored and truly touched by this marvelous write up. Thank you, Central Carolina Skating Club!

1) Passion! There is nothing more wonderful than pursuing something you are passionate about. Getting on the ice is the favorite part of my day. 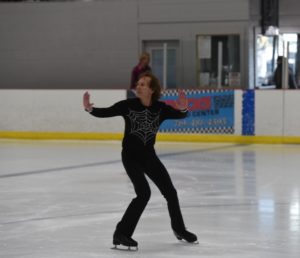 There is no place I would rather be than on the ice!

2) Support! A supportive community helps assure success. The Central Carolina Skating Club, the Adult Competitive Figure Skating Facebook group and the US Figure Skating Association are all so supportive of adult skaters, and provide frequent inspiration and assistance.

3) Coaching! Learning a difficult sport (or anything difficult) requires excellent competent teaching and coaching, and I found the perfect coach in Paula McKinley. Read my past blog on the importance of coaching.

4) Hard work! Figure Skating is not easy, especially for an old dude like me. I need to really focus and dedicate myself to the necessary hard work to grow and improve.

5) Commitment! And figure skating is a many year life-long journey. You cannot skate for a few months and then think you know it all. I will likely be learning and growing new skills for the next 20 years. And that excites me.

Again, I thank my blog readers, my coach, my skating club, my skating friends and the US Figure Skating Association for all your encouragement and support along this fantastic journey! 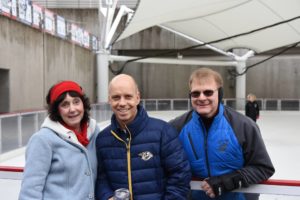 Joanne and her husband Greg with Olympic Champion Scott Hamilton, on ice, at his Skate to Eliminate Cancer event at the 2017 US Figure Skating Championships in Kansas City.

I continue my monthly blog series based on US Figure Skating’s popular “Get Up” campaign which shares the message that life, like the ice, is hard, and we can certainly fall on it. But the more times we get up and persevere, the stronger we become.

For October, I interview Joanne Vassallo Jamrosz, an adult figure skater and fan who has published a wonderful series of books featuring dozens of skater and coaches, famous and not-so-famous, who have each gotten up from trials and hardships to grow their love for figure skating. And I am thrilled that my story as an adult skater starting at the age of 59 is included in her newest book just out, “Skating Forward – Olympic Memories, Olympic Spirit.”

Stan: Joanne, first can you share about how you got interested in figure skating as a fan and participant?

Joanne: I began ice skating during the summer of 1988. I was 29 years old. I was home, sick in bed with the flu, during the 1988 Olympics. So I watched a lot of skating! I remembered loving skating as a child and thought, why not take lessons? Adult skating was just coming to our skating programs across the country so I joined our local club The Clinton Figure Skating Club that fall. I started learning the basics then graduated to testing some of the ice dances. As a fan, my husband Greg and I attended our first marquee event in the fall of 2009 when we went to Skate America in Lake Placid. We also attended our first Friends of Figure Skating Breakfast at that event as well. From there we went to our first Nationals in Spokane (it was also the year Skating Forward book one debuted). What can I say? We were now true skating fans and every year we put Skate America and the U.S. Championships on our travel schedule.

Stan: What then inspired you to write your first book, “Skating Forward?” 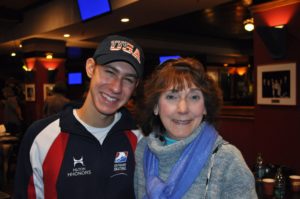 Joanne: I am journalism major. I loved to write, even as a little girl, I would spend hours writing stories. But the inspiration really began in 1991. I was diagnosed with breast cancer at the age of 32, just when I was getting my skating legs under me. It was a long year of surgery, chemo, radiation and recovery-but what got me through was my skating. My coach at the time Jason Dilworth would come in before the morning skaters, at around 6 AM, just so I could stroke around and move on my good days. It’s why I think I did so well and recovered so well. It was being on the ice. Not long after I did a little trial judging and I wrote about the experience and sent it to Skating Magazine. It was published! That did it. I began focusing on the two things I loved most, Skating and writing. I still contribute to the magazine today.

The Skating Forward books began in 2009. I was recovering from an accident (broken hip). I wrote some features for the US Figure Skating web page, and they all coincidentally were about some amazing young skaters who faced some pretty tough circumstances in their lives but kept on skating. I thought what a GREAT idea for a book. So I reached out to coaching friends for names of some inspiring skaters to profile (and received more stories then I could possibly have room to publish). Still do to this day. I think I could write skating Forward books for the next 20 years. We have so many incredible skaters out there and their personal stories are AMAZING, and very few people know about them. So it’s my honor and joy to feature them.

Stan: Do you feature a “get up” theme through the stories you share in the books?

Joanne: All of the stories do indeed have a Get Up theme. Not everyone survived a tough illness (although I have profiled cancer survivors, Tourette’s Syndrome, Lyme Disease, Juvenile Diabetes, hearing disorders, epilepsy) and on and on. But I’ve also profiled a coach who devotes her life to autism awareness because she has a young son with autism spectrum disorder. Another adult skater began a fundraiser in honor of her two sisters who passed away at very young age, and she raises money for the hospital that helped them both. I’ve also profiled current competitive skaters who overcame injuries and came back the following year to compete, and one young skater who went through a lot of finding herself on the ice before returning this year as one of our top senior ladies.

Joanne: It’s funny but I often tell people my hip break was in a funny way my “lucky break.” Had I not been home sitting, bored to tears I probably would not have written the Skating Forward books. I believe my cancer journey planted the seed, and then in 2009 it came to be. 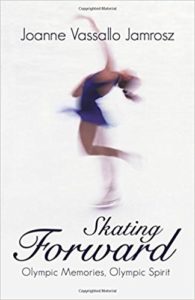 Joanne’s latest book just came out this Fall leading up to this next Olympic season.

Stan: What is special about your most recent book that just came out, “Skating Forward, Olympic Memories, Olympic Spirit?”

Joanne: The readers will meet three incredible Olympians. Jim Millns and Colleen O’Connor were our first U.S. Ice Dancing medalists, receiving the bronze at Innsbruck in 1976. They share their wonderful Olympic journey and what it was like to be on the 1976 team with Dorothy Hamill and Linda Fratianne, Tai Babilonia and Randy Gardner and others. Our other Olympian is Jeremy Abbott and he shares that special Olympics in Sochi when he truly had a Get Up Moment. After a horrific fall in the short program he got up and finished his program creating probably one of the best Get Up moments on ice ever. Of course we have wonderful Olympic Spirit stories too. National Coach Darin Hosier is a stage 4 colon cancer survivor. Cara Zanella is a gold test adult skater living with Rheumatoid Arthritis. Staci Montagna-Vail is a silver test judge and a stage 4 breast cancer survivor, and two of our current competitors, Ernie Utah Sevens and Jordan Moeller talk about getting up after serious injuries that kept them from competing for an entire year!

Stan: How can someone order this and your other books?

Joanne: Books will be available at the US Figure Skating merchandise booth in Lake Placid at the 2017 Skate America. We will also be at Adult Nationals in 2018.

Stan: Is there anything else you would like to tell us in closing?

Joanne: I feel so blessed to be able to do what I do. To work with these incredible skaters, parents, coaches and fellow fans. My husband Greg and I have made so many skating friends over the years. We call them our Skating Family, and they are a HUGE reason why we enjoy going to the marquee events each year. It’s our Family Reunion. That I can get up each morning and write about this incredible sport is a blessing beyond belief. I am so truly grateful.

Stan: Thanks you, Joanne! I won’t be able to make it to Skate America in Lake Placid this year, but I look forward to seeing you at US Nationals in San Jose!

My previous monthly “Get Up” blogs can be found on my skating video and blogs page.