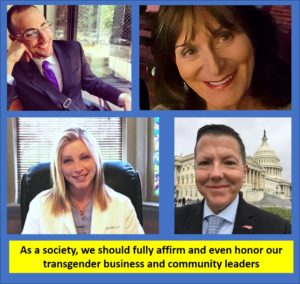 Clockwise from top left: Rhodes Perry of Rhodes Perry Consulting, LLC; Elaine Martin of The Power of Diversity; Ames Simmons of Equality NC; and Dr. Christine McGinn of the Papillon Gender Wellness Center (one sentence bio with links at bottom of blog)

I have a young cousin (actually he is my first cousin’s son) who is about to enter the Social Work Masters Program at NC State University. He is a hard working young man who has worked almost full time while paying his way through college. And he is an enlightened straight white male who truly cares about diversity issues; in his latest graduate class he wrote a series of papers on the mass incarceration of African Americans in the US and some ways that can be addressed. In fact, I will be asking Brandon to write a few guest blogs for me on this issue.

Brandon often likes to send me some interesting thoughts and articles on diversity since he knows that I am a diversity consultant. Being quite aware that my fastest growing segment is assisting companies in assisting their transgender employees who choose to go through gender transition while remaining in the workplace, Brandon will often send me his thoughts along with some interesting articles. I remember when the newly elected President Trump took initial steps to end support for transgender students in school, Brandon texted me, “How horrible is this strip of protection by the Trump administration. So transgender students have no protection over the bathroom they can use now? And pretty much all transgender people are going to migrate to the liberal states where they feel protected like New York, Colorado and California?” (see a full blog I wrote on this discussion, More NC HB-2 Discussion – Two Business Perspectives)

In terms of transgender rights, there has been great progress, but also disappointing regression. Many more companies are now understanding the value of a skilled diverse workforce, including fully supporting transgender employees. Yet at the same time, the current federal administration is oppressing America’s transgender citizens by actions such as trying to remove them from the US Armed Services.

Brandon this past month sent me an article that has quite an interesting and provocative perspective on the recent Federal Government’s seizure of the “Backpage” website, asserting that it promoted human trafficking and prostitution. (Link to article). This particular article asserted that this action disproportionately affects transgender people who may need to resort to more dangerous street work to make a
living when there is no other alternative to arrange work online. See also a NY times article on the shut down of “Backpage.”

I ask, would these two Philadelphia transgender sex workers be in this profession if they had better economic opportunities? (Photo from Joseph Kaczmarek, Philadephia Daily News)

1) Instead of continually doing things to shut down transgender people’s access to making a living, non-discrimination laws need to be passed to protect the working rights of all LGBT people.

2) Ostracizing any subset of Americas as “less than” stymies them from contributing fully to our economy and community and therefore harms all of us.

3) Instead of cutting down and hating transgender people, we are a society should fully accept them and provide educational and vocational assistance along with total respect so they can thrive along with all Americans.

* * * * *
One line bios with links of the four transgender Americans in the photo collage at the top of this post:

After a robust and diverse career, Rhodes Perry formed Rhodes Perry Consulting and hosts his weekly Podcast, “The Out Entrepreneur.”

Following careers as a bank executive and as owner of an aviation company, Elaine Martin has formed her consultancy, “Power of Diversity,” offering Transgender Consulting Training and Coaching for employers and their employees.

After more than a decade of in-house counsel practice at a healthcare consulting company based in Atlanta, Ames Simmons moved to North Carolina to become Equality NC’s Director of Transgender Policy.

Dr. Christine McGinn is one of the world’s leading gender transition surgeons, and the founder of the Papillon Gender Wellness Center.