I got to meet one of my all time favorite skaters, the strikingly handsome and current US champion Adam Rippon, when I won the US Figure Skating trip to Champs Camp in 2013.

HOT!! – on January 23rd I published my third and most recent installment of this series – Seven more fabulous out LGBTQ+ athletes of figure skating.

Important Note: this blog only features athletes who voluntarily, personally and publicly disclosed themselves as gay.

NOTE January 2018: Since this blog is almost two years old and this being an Olympic year, I have now written and published “Seven More Fabulous Out Gay Men of Figure Skating (and One Bisexual Woman.)” Do check it out. LINK

UPDATE December 2016: Please take the time to listen to this outstanding and marvelous radio interview with 2016 US National champion Adam Rippon from WVIA Public Media of Northeastern Pennsylvania (24 minutes). Adam takes us on his journey of personal growth up to his inspiration for his musical choice for his 2017 program, which he is also using this season.

UPDATE January, 2018: Here is a new fantastic video of Adam Rippon sharing his “coming out” story.

Recently, Out Magazine came out with their list of “100 Hot Out Gay Men” which included people in entertainment, sports, politics, business, etc. WHAT – and not a single figure skater was on the list! Therefore, since the World Figure Skating championships are being held next week (March 30 – April 3) in Boston, first time in the USA in 8 years, I am publishing my own list of seven hot out gay men of Figure Skating.

And before going any further, I am going to quickly dismiss any discussion about figure skating not being a true sport. I challenge anyone to give it a try – figure skating requires a tremendous amount of balance, stamina and flexibility. In fact, check out this article on why figure skating is indeed one of the most difficult sports in the world. And figure skaters look calm, cool, collected and fabulous while competing.

My list of outstanding men include skaters from the past and present. In alphabetical order:

Brian Boitano. This 1988 Olympic Champion continues to be a perennial spokesperson for US Figure Skating and has hosted his own popular cooking show. President Obama appointed Brian, as an out proud gay man, as one our American delegates to the Winter Olympics in Sochi, Russia in 2014 to counter some of the close-minded anti-gay rhetoric of Russian President Vladmir Putin (see my blog “Russia, LGBT Rights and the Psychology of Bullying”) 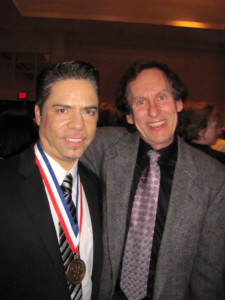 I had the wonderful privilege of attending Rudy Galindo’s induction ceremony into the US Figure Skating Hall of Fame in 2013.

Rudy Galindo. This skater of Mexican descent overcame economic and personal hardship to win his senior US championship on his 8th try, in 1996, becoming the oldest men’s champion in 70 years. And he won the world bronze medal that year! He also was a pairs national champion with his skating partner Kristi Yamaguchi. Rudy is the first openly gay US champion and also later shared about being HIV+. He went on to a stellar professional career with his entertaining “YMCA” program, and was inducted into the US Figure Skating Hall of Fame in 2013. Rudy and is now making his mark as a coach and choreographer, including working with current US Silver Medalist Polina Edmunds.

Randy Gardner. Randy Gardner was a 5-time US and one-time World Champion in the late 1970s with his skating partner Tai Babilonia. Randy had remained active in the skating world, continuing to skate in shows and coaching at Dorothy Hamill’s Adult Figure Skating Camp. Randy has now embarked on a new venture, starring in his one man show “Go Figure!” about his fascinating personal and skating life. (Link to a 3 minute Youtube video about the show.) 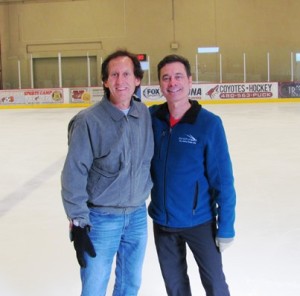 I have so much enjoyed being coached by World Champion Randy Gardner at the past two Dorothy Hamill Adult Fantasy Figure Skating Camps.

Brian Orser. Brian Orser of Canada finished second in the 1988 Olympics to Brian Boitano in the famous Olympic “Battle of the Brians.” Brian Orser has now gone on to be one of the most successful international coaches on the planet, having coached two Olympic champions (Yuna Kim of Korea and Yazuru Hanyu of Japan) and currently coaches the top two men in the world (Hanyu and Javier Fernandez of Spain.)

Eric Radford. In December 2014, Eric Radford of Canada publicly came out as gay in an interview with the LGBT publication Outsports, becaming the first competitive figure skater ever to come out at the height of his career while still a contender for championship titles. Then in March, 2015, Eric and his partner Megan Duhamel won the world pairs title, making him the first openly gay figure skater ever to win a gold medal at that competition. He is an ambassador for the Canadian Olympic Committee’s #OneTeam program to combat homophobia in sports.

Adam Rippon. Adam Rippon comes out as gay in a feature story of US Figure Skating Magazine a few months ago and how does he follow up the story? By going out in January and winning his first US Seniors title to go with his two silver medals! The current US Men’s Champion with his fashion-model stunning good looks is one of the hardest working yet kindest and most loved skaters in US figure skating today. Raised by a single mother, this oldest of six children also serves as fine supportive role model and loving older brother to his five siblings.
See also video of Adam’s coming out story. 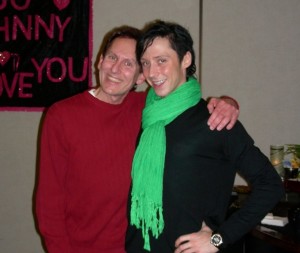 I enjoyed meeting Johnny Weir at a fan club gathering at the 2010 US Nationals, the second time Johnny qualified for the US Olympic team.

Johnny Weir. Sure, the flamboyant and outspoken 3 time US champion and 2 time Olympian Johnny Weir may have his critics, but three things cannot be denied about this fine young man.
1. He is now emerging as a superb figure skating broadcasting announcer who takes his work seriously and showcases his vast knowledge of figure skating and every single competitor.
2. He is an excellent spokesperson for diversity and individuality, and treating all humans with dignity and respect.
3. He always treats all his fans and especially children with kindness and personal attention. I have personally witnessed Johnny at arenas after events and even if there is a long line of adults and children wanting to say hi or take a photo, he stays until he gives some time to the very last person.

Blog author Stan Kimer, in addition to training as an adult competitive figure skater himself, is a career development and diversity consultant with a deep expertise in corporate LGBTQ diversity strategy and training. Please explore the rest of my website (which includes my own figure skating page) and never hesitate to contact me to discuss diversity training for your organization, or pass my name onto your HR department.