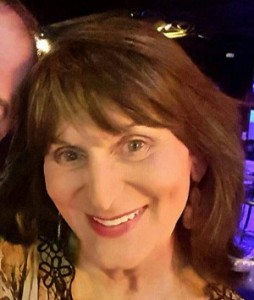 So is it appropriate for this beautiful woman to use the men’s room? Our North Carolina legislature and governor sure think so.

There has been so much written the past few days about the horrific anti-LGBT bill that just passed in North Carolina, I decided to write a blog about the larger systemic societal and political issue that has led to this.

As a diversity consultant, as a Christian, and as an overall positive upbeat person, I cannot understand why a huge segment of the American population needs “someone” or “some group” to “hate on.” It is a very sad fact that many people run for public office on platforms of what group we are going to punish or kick out. In the distant past, African-Americans were often demonized, as well as business-oriented women who wanted equality in the workplace. Then after that it was gays and lesbians, and in a way, they are still a target in many locations. But lately it seems the heat of hatred has been really turn up on undocumented immigrants (often referred to as illegal aliens – I thought all people were created and loved by God so how can they be “illegal?”), Muslims, and especially on transgender people.

Transgender people are indeed a very small segment of our population, but have been increasing in visibility as high profile celebrities such as Chas (formerly Charity) Bono and Caitlyn (formerly Bruce) Jenner have come out and undergone gender transition. Now over half of US Fortune 500 companies include nondiscrimination protection for transgender individuals, and many now include gender transition medical benefits. (link to my blog about the increasing visibility of transgender people.)

But now in many states, legislators are proposing new laws that would be very harmful to transgender people, including not allowing them to use the public restroom of their presenting gender, or not being able to change official records such as drivers licenses if their current gender does not match their gender assigned at birth. Some politicians are causing a frenzy of hate against transgender people by shamelessly scaring people with totally fabricated and non-factual statements such as transgender people going into restroom to molest children. 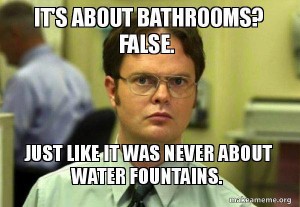 Now in my state of North Carolina, our State Republican leaders called a hastily convened expensive special session of our state assembly and in one day with minimal reviews and discussion passed a state law forbidding municipalities of including protections for gay, lesbian, bisexual and transgender people in their own non-discrimination ordinances. In addition, this new state law dictates that transgender people must use the restroom of the gender on their birth certificate.

Recently, my letter to the editor (link) of our local newspaper (the Raleigh News and Observer) was published where I shared the true factual information. Namely:

2. Transgender women and men go into the restroom of their presenting gender to “relieve themselves”, period. Watch this fun video of a transgender woman singing about needing to pee.

3. There are never been a single recorded incident of a transgender person attempting to molest someone in a restroom. Never. Not one.

So what are these politicians afraid of? Sadly, they must feel the only way to get elected is to appeal to humanity’s base side and give them someone to hate. How sad!

ACTION: All people who want to stand up against hate need to reject all politicians who operate out of that mindset and elect officials who want to treat all people fairly and humanely.

FINAL NOTE: Blog author Stan C. Kimer provides corporate and organizational training on a wide range of diversity topics including transgender diversity. Check out “my speaking page” where you can see my upcoming schedule and request a copy of my speaking package.