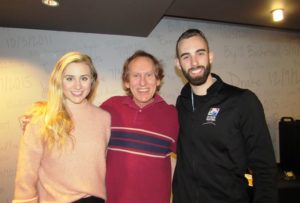 I met US pairs skaters Ashley Cain and Timothy LeDuc at the 2017 US Nationals where they won the pairs bronze medal.

HOT!! – on January 23rd I published my third and most recent installment of this series – Seven more fabulous out LGBTQ+ athletes of figure skating.

Blog author Stan Kimer, in addition to training as an adult competitive figure skater himself, is a career development and diversity consultant with a deep expertise in corporate LGBTQ diversity strategy and training. Please explore the rest of my website (which includes my own figure skating page) and never hesitate to contact me to discuss diversity training for your organization, or pass my name onto your HR department.

Important Note: This blog only features athletes who voluntarily, personally and publicly disclosed themselves as gay.

Since my original “Fabulous Out Gay Men of Figure Skating” is almost two years old, I decided to write this second installation with 2018 being an Olympic year. In addition to my original blog’s Adam Rippon and Eric Radford more than likely competing, Brian Orser coaching and Johnny Weir announcing the 2018 figure skating at this year’s Olympics, this blog contains a few more people we should be seeing there.

Before or after reading this blog, you may want to relook at the original 2016 blog where I also provided some information and link about figure skating not only being a legitimate sport, but about how truly difficult it is.

These fabulous men who are excellent role models and testament to hard work are, in alphabetical order:

Christopher Caluza cuddles a koala in Australia as he travels the world on a cruise line’s figure skating staff.

Christopher Caluza – This dual-citizen Filipino-American figure skater began his early career skating for the US, and then later for the Philippines. Christopher was the Filipino national champion in 2012 and 2013, and represented the Philippines at the Figure Skating World Championships for 3 years. He is now retired from competitive skating and enjoys seeing the world while skating in the ice cast of Royal Caribbean Cruises. Christopher is very active on Facebook as an out proud man who advocates for respect and equality for all people.

Guillaume Cizeron – UPDATE: On 17 May 2020, in honour of the International Day Against Homophobia, Transphobia and Biphobia, he came out as gay with a post on Instagram showing him with his boyfriend. This extremely handsome and sexy man from France (check out his public Facebook page!) is a two time world ice dance champion with his partner Gabriella Papadakis. Papadakis and Cizeron currently hold the world’s record top ice dance international competitive score and are one of the favorites to win Olympic gold in 2018.  UPDATE:  Papadakis and Cizeron did indeed win the Olympic gold medal.

J. Scott Driscoll – Scott was a competitive American skater in the junior and senior ranks in the early 1980s, and then a frequent medalist thereafter in the US Open Professional Championship ranks. Now coaching in Palm Springs, California, what is extraordinary about Scott is his use of his skating to promote anti-bullying and acceptance of LGBT people through his beautiful and dramatic program, “Your Love Matters.” Link to performance on Youtube.

Timothy Goebel – This American skater, the Olympic men’s bronze medalist in 2002, known in the skating community as “the quad king,” helped usher in the “quad jump revolution” within men’s figure skating. Probably the most technically proficient skater of his day, Timothy made Olympic history in 2002 by being the first man to successfully land a quadruple salchow in combination at an Olympic competition. This one time US gold medalist and three time silver medalist married his long time boyfriend Thomas Luciano in April, 2017.

Timothy LeDuc – This dark-haired tall handsome American pairs skater initially competed with three different partners from 2009 – 2014 with their best senior’s pair finish of 7th in the US Championships with DeeDee Lang in 2014. After retiring and then performing on a cruise line ice skating performance staff, Timothy was called out of retirement to re-enter competitive pairs skating with a new partner, Ashley Cain. The tremendously hard working team accomplished the amazing feat of placing third at the 2017 US Nationals in just their first year together! Be looking for this tall pair with their gorgeous extensions and long lines to compete for US and world medals in the years to come.

Javier Raya of Spain (left in photo) came out by expressing his happiness of finding the love of his life, Andrew Nicholson.

Javier Raya – Javier Raya is viewed as the “number two” male skater in Spain just behind 2-time world and 5-time European champion Javier Fernandez. Javier Raya, a crowd favorite with his emotional skating, is the 5-time Spain silver medalist and will surely be making his second Olympic appearance in 2018. He proudly came out as a gay man in May 2016 by posting a charming photo kissing his boyfriend Andrew Nicholson and writing, “I have to say that right now I feel like the luckiest person in the world!”

David Wilson – this out and proud world-class choreographer has worked with several Olympic medalist in the past and will likely have several of his skaters participating in the 2018 Olympics. After his competitive career was cut short at the age of 18 due to Osgood-Schlatter disease, he toured with various ice shows before the entering the choreography field. David has now established himself as one of the top and in demand choreographers and his clients have included Olympic competitors and medalists like Jeremy Abbott, Patrick Chan, Yuzuru Hanyu, Kim Yuna, Fumie Suguri and Johnny Weir. 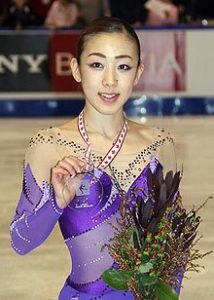 And though this blog is specifically about gay men, I would like to do a shout out to female skater Fumie Suguri. This four-time Japanese National Champion finished 5th in the 2002 Olympics and 4th in 2006. She came out in the Japanese media in 2014 as bisexual, quite a bold move within the Japanese culture.

Note January 18, 2018: A few weeks after publishing this blog, Outsports did an interview with and story about Timothy LeDuc. Link to the story.

Added February 8, 2018: A fantastic short television segment and interview with Timothy LeDuc who us featured in this blog.