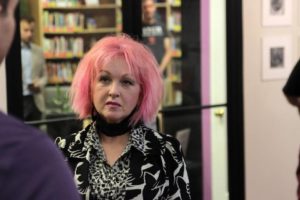 Cyndi Lauper visiting Raleigh’s LGBT Center before her June 4th concert. I recognize the bookshelves in the background! (Photo courtesy of the Raleigh News and Observer)

North Carolina has now become quite infamous for passing perhaps the most anti-LGBT (Lesbian, Gay, Bisexual, Transgender) state law in country also referred to as HB2. Provisions of this bill include dictating that transgender individuals must use the restroom of the gender on their birth certificate instead of their “current presenting gender” in public facilities, and municipalities and counties are forbidden to have local non-discrimination ordinances that include sexual orientation and gender identity. In large part, HB2 was passed to invalidate a recent ordinance in the city of Charlotte that is equivalent to non-discrimination protections currently included in a vast major of Fortune 500 companies’ corporate policies. (Link to my letter in the Raleigh News and Observer about this.)

I truly believe this arcane law was passed out of fear, misunderstanding and /or hatred of gay and transgender people. I also believe the law is meant as political fodder to divide the people of North Carolina and pit us against one another. Do check out a blog I wrote earlier this year, “Why do we all need someone to hate on – and now in NC it’s transgender people.”

In response, many music performing artists like Bruce Springsteen have boycotted North Carolina and cancelled their performances. They all articulate their displeasure with this law and their unwillingness to travel to a state which discriminates so blatantly against a segment of their population. I do agree that these cancellations raise the visibility of the issue and that the economic impact may drive our leaders to reconsider their actions. However, these artists are also punishing the many fair-minded people and the LGBT citizens of North Carolina who enjoy their music and want to attend their concerts. Now if more events that may appeal to those who support HB2 (like the NBA all-star game or NASCAR events) decide to boycott, that may really raise the visibility of this issue.

So what is a viable alternative? Do what Cyndi Lauper did!

Instead of cancelling her concert, she came early and met with LGBT youth at Raleigh’s LGBT Center. She discussed the impact of HB2 with them and expressed that there are many many adults who love and care about them as full equal human beings despite what they may be hearing from our government leaders. And then she proceeded to donate the concert’s profits toward working to have HB2 overturned. Quote from Ms. Lauper, “I will be donating all of the profits from the show to Equality NC’s efforts to repeal HB2 and I am proud of my manager and agent for joining me in this effort by donating their commissions from the show to this vital effort.”

I just know having a heart to heart chat with a mega-star like Cyndi Lauper is an experience that will remain with those teens the rest of their lives, and that her donated funds will really help Equality NC’s efforts significantly. Read the details in this Raleigh News and Observer article, “Singer Cyndi Lauper meets with LGBT youth in Raleigh to talk to HB2.”

Though I respect artists and groups who are boycotting North Carolina due to HB2, I encourage them to perhaps think different and more creatively. Don’t desert us and isolate us in our time of need. Instead, come be part of the solution, and consider Cyndi Lauper-izing us instead!