As a diversity consultant with a deep expertise in LGBT (Lesbian, Gay, Bisexual, Transgender) diversity, about half my clients do engage me for all areas of diversity and inclusion, which includes race. Even though the diversity discipline has evolved from the initial areas of gender and race to now include LGBT, generational, cognitive, the differently-abled, and more; racial issues certainly need to continue to be front and center. (see my blog “The Various Growing Types of Diversity.”)

Though a good number of white people believe that the racial discrimination of the past is eradicated, the black community for the most part, as well as statistical realities, would indicate otherwise. And racial tensions continue to rage as we have seen in the disproportionate number of black men and boys killed by police, the black lives matter movement, and the increased number of race related hate groups becoming active in the United States. (see my blog “Facing the Truth – Racism Still Persists in the USA.”)

I have recently read a most fascinating book which places racism in the United States in a much broader historical perspective since the very beginnings of our nation’s founding. In “Divided We Stand,” David R. Morse provides a full historical account of the many forms of racism that has been a part of our country’s history. It is important to own this part of our history, and by understanding history, we can all work together to build a more just society.

The sections of this fascinating book full of interesting accounts and data include: 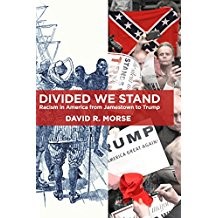 “Divided We Stand” is a fascinating book detailing various types of racism throughout the USA’s history.

• The early struggles within white mostly Anglo-Saxon America in terms of integrating waves of immigrants from Ireland, Germany, Italy and Jews.

• The long African-American history from the days of slavery until today, including the doctrine of the “superior” Caucasian Race and the Jim Crow laws of the early 20th century.

• The history of Hispanic Americans starting with the treatment of the population already in the areas of the Southwest “conquered” by the USA up through the debate that continues to rage about illegal immigration.

• The history of Asian-Americans, their treatment and oppression during the gold rush days of California and the building of the western railroads, our government’s agreements with Japan, up to many who view Asians as the “model minority.”

• Scholarly discussion on the science around genetics and race, and then closing with the landscape of race relations in the USA today.

This book certainly made me aware of so much more of the history and dynamics behind the multiplicity of racial issues in our diverse country from its very beginning. And hopefully by understanding this history, we can all unite more rigorously to build a stronger country from our profound and unique blend of diversity.

I highly recommend this book!