It has been well over a month since my last blog entry. Much of the reason is that I was in East Africa for over 3 weeks, taking a little vacation and also doing some volunteer networking and work with Metropolitan Community Churches, Other Sheep and Global Roots. 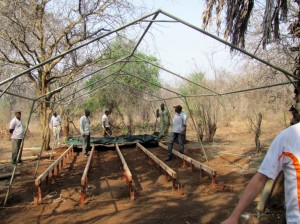 With Global Roots, I returned to Mtito Andei, Kenya for the first time since providing the seed funding to start the Matangini / Kimer Vocation School and the Jipe Moyo campsite. (Link here). I am pleased to report that construction has started!

After returning to Mtito Andei, I was asked to go on a three-day survey trip for Global Roots into the Rift Valley area of Kenya, northwest of Nairobi , to assess opportunities for new projects. I met and was hosted by three bright young emerging leaders who head three non-profit groups in the Rift Valley area. These young leaders are attempting to engaged the younger generation of Kenyans in the political process and economic development, with the goal of leading Kenya into a more fair, open and prosperous society that can benefit all people of the country. These three Kenyan groups are:
• Smart Citizens
• Youth Peace Alliance
• Imagine Kenya 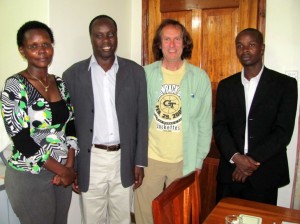 In addition, I also met with some established senior government leaders who seek to steer Kenya in a good direction. I then saw the connection to the need for mentoring, which is one of the topics I will be speaking on a conference in August. (Gaston Teaching and Learning Conference.) Ways in which mentoring can help with the capacity building of future Kenyan leadership can include:
• The emerging leaders I met with mentoring the burgeoning young adult population of Kenya
• The current established Kenyan leaders with high integrity mentoring the emerging leaders
• Leadership development and economic development expertise from other countries in the world mentoring the willing and enthusiastic future leaders of Kenya.

I left Kenya with a positive hope of progress that can be made under the leadership of these new emerging leaders who want to build strong competencies coupled with high integrity and a real desire for the best future for the entire country. I look forward to staying involved in this development.