Please see and use the many links featured in this blog to read additional details. 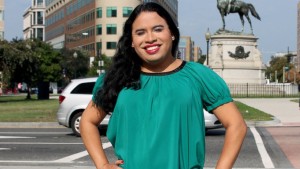 Many people are familiar with the term, “The perfect storm” that describes an event where a rare combination of circumstances will impact a situation drastically. I truly believe we are now in “a perfect storm” for the fight for equality including workplace and health benefits for transgender people. Many positive recent happenings have now all aligned so that is there is a tremendous focus on understanding and appreciating this misunderstood and often maligned segment of our population.

As a diversity consultant with a deep expertise in LGBT (Lesbian, Gay, Bisexual, Transgender) Diversity, when I have presented an LGBT Diversity workshops to Human Resources Professionals throughout 2015 (see my blog about this), a vast majority of questions during the Q and A time are about the transgender segment. Just last week I delivered a workshop titled “Corporate and Organizational Support for Transgender People: The Whys and Hows” at the monthly meeting of the HR Management Association of Greensboro (North Carolina) to a sold out crowd of over 150 engaged HR practitioners. Yes – we are not talking New York City nor San Francisco, but here in North Carolina!

Here are the five items in chronological order which I believe have contributed to what I have termed this “perfect trans-storm:”

1) The 2009 “coming out” of high profile celebrity Chas Bono, the child of pop singers Sonny and Cher.

2) The growing popularity of transgender television star Laverne Cox on the hit television show “Orange is the New Black” which premiered in 2013 and is still running. And this was followed in 2014 with a photo of Laverne Cox on the cover of Time Magazine with the story titled “The Transgender Tipping Point – America’s Next Civil Rights Frontier.”

3) The executive order signed by US President Obama on July 21, 2014 making it illegal to fire or harass employees of federal contractors based on their sexual orientation or gender identity and explicitly adding discrimination against transgender employees within the federal government. Link to blog about this announcement.

4) The much publicized gender transition of Olympic champion Bruce Jenner to Caitlyn in July of this year. 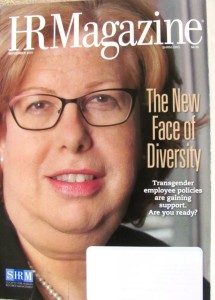 Coincidentally, the day I presented my workshop at the Greensboro SHRM (Society of Human Resource Management) chapter meeting, the September issue of the SHRM monthly “HR Magazine” was delivered to my home. And the cover story? “The New Face of Diversity – Transgender Employee Policies Are Gaining Support – Are You Ready?”