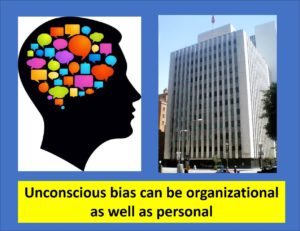 A year ago, I provided a two part series on Unconscious Bias, which defined this phenomena and how to address it at the personal level. Since that time, I have developed an in depth workshop that is now being offered as part of the National Diversity Council’s training program. In addition, I am available to provide consulting and customized training on unconscious bias for clients.

But … want to know something very important? Unconscious bias, defined as “the attitudes of stereotypes that affect our understanding, actions, and decisions in an unconscious manner… in ways we may not even be aware of ….” is not only personal. Organizations themselves can also have a culture of embedded unconscious bias. Often the unconscious bias of the majority in leadership or in power can then become the norm for the entire organization.

Here are some ways unconscious bias can manifest itself in an organization:

• Recruiting and Hiring – it is so easy to gravitate toward people who have more common in ourselves or our organizational culture rather than skills. One example in the hiring area is bringing in engineers or lawyers overwhelmingly from one particular university.

• Work Assignments – leaders can tend to give the plum assignments to people most like themselves, or could give assignment out based on stereotypical views; e.g. the single person with no children will be more dedicated to this tough project than an employee with small children. 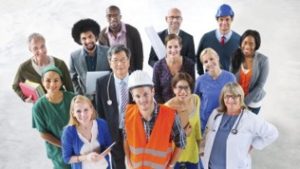 • Team work – we may gravitate to working more closely with people like ourselves and unintentionally not draw in or listen to people who are different.

• Promotions and Talent Development – we see organization unconscious bias in the way the white male senior corporate leadership seems to perpetuate boards and c-Suites that have very few women and people of color. Are diverse people given the chance to be mentored and developed in leadership? See my recent guest blog on the Importance of Minority Coaching.

• Treatment and Interaction with clients – we can see this often in retail environments where people in the majority population or who are older or dressed more conservatively are given preferential treatment.

Contact me to discuss the customized unconscious bias training I can provide for your organization!  [email protected] or call me at 919-787-7315